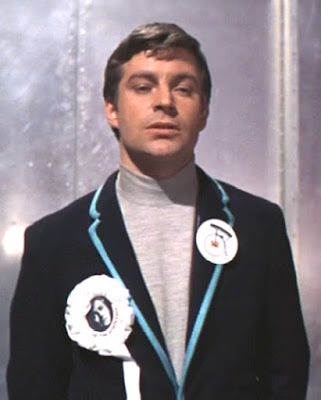 Ah Number 12, you’ve been with The Village for quite a long time, but obviously not long enough. You hold some strong opinions about the Professor. You think him a crank and should be treated as such, that his idiocies are indulged far too much. He’s a troublemaker, who attracts troublemakers, you mean Number 6? What about you…..Number 12, are you a troublemaker? Perhaps you’re one of those dissidents you later mention. Tell me, what were you doing on the beach that night? Were you looking for the Professor’s tape recorder, because you found it! Were you down on the beach earlier in the day, and watched Number 6 dig up the tape recorder the Professor buried in the sand. Perhaps it was you who the Professor was running away along the beach to meet. I can’t think of anyone else it might have been. After all you did give the tape recorder to Number 6, a known trouble maker, knowing that he would want to put the message it contained to good use. But he didn’t, he gave it to Number 2, saying he’d no further use for it. So with the tape recorder now in Number 2’s hands, that must have made it easier for you to get your hands on it again. So that you could micro reduce the Professor’s lecture about the General and Speedlearn ready for transmission. Is that how it was? Then of course there was that clever act of sabotage, which not only fused the lights in Number 6’s cottage, but also the surveillance. That allowed you to talk with Number 6 about the Professor’s next lecture, and hand him the two security pass discs. Then the next day you had Number 6 in your office, no doubt for another briefing of the plan, as well as to supply him with the uniform of a Top Hat administrator, and member of the Board of Education. You’re a troublemaker Number 12, someone who attracts troublemakers. And the same can be said of Number 6. Nice blazer by the way, very smart!