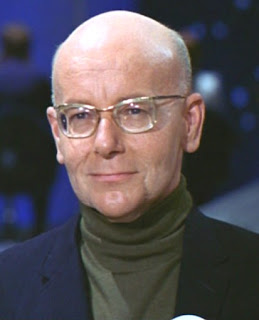 As Supervisor I guess you’ve got a relatively important job, perhaps even second to Number 2 shall we say? Well let’s presume so anyway. I suppose it might also be said that you are Number 1 in a way, within the domain of your control Room, your word is supreme. In fact I would go as far as to say that you have a more secure position than that of Number 2. I know Number 2 once relieved you from your position on one occasion, but that was a mistake, which was rectified some time between ’Hammer Into Anvil’ and ‘It’s Your Funeral.’ Generally you are a very competent and able Supervisor, and once you attempted to advise Number 2 in his dealings with Number 6, and were rebuked for it. You also got to speak, if very briefly, to Number 1. It’s not every Supervisor who can claim that distinction. You didn’t happen to recognize the man’s voice? No, well never mind, you were not the only supervisor not to recognize the voice of Number 6 when he heard it! And it was you who first put a number to the Prisoner, Number 6!

But you were more than a Supervisor, you were a delegate on the Assembly. Tell me, who did you leave in charge of The Village that time you took Number 6 from the Embryo Room to the cavern, taking your place on the Assembly? That suggests that you were higher than Number 2, and apart from the former 93 the man with the full beard, its makes one wonder who else from The Village were sat on the benches of that assembly. Doesn’t it make you wonder?

Be seeing you
Posted by David Stimpson at 06:52