Have you noticed, but when Number 6 attempts to escape by land, either driving a Mini-Moke in ‘Arrival’………………. 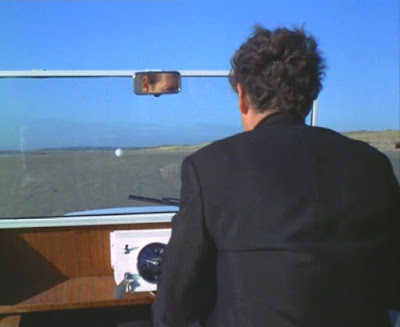 Or by sea behind the helm of a jet boat in ‘Free For All,’ the end result is very much the same! 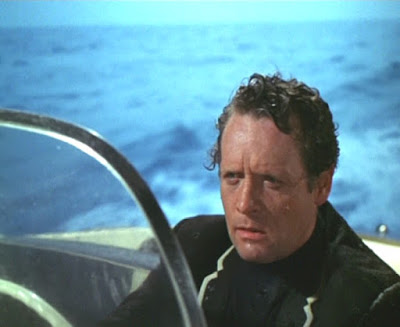 In ‘Arrival,’ when Number 6 attempts to Escape The Village for the first time, he does so driving a Mini-Moke along the beach, having fought off two Guardians. Soon after which, as the vehicle heads towards the outer zone, it impacts with something in the sand which causes the Prisoner to be thrown out of the Mini-Moke, leaving him sprawling on the sand. Then in a later episode, ‘Fall Out,’ Number 6 again attempts to escape The Village, this time by sea. Having fought off two motor mechanics aboard the Jet boat, Number 6 heads for the open sea, but pursued by Number 2 in the helicopter. Number 2 instructs the Prisoner to turn back before it’s too late. Ahead the membranic Guardian appears on the water, skimming across the waves on a course straight for the boat. Number 6 turns the helm this way and that, but to no effect! As the Guardian gets closer and closer Number 6 abandons the boat and dives into the water. This in similar way when Number 6 parted company with the Mini-Moke. Both actions cause a confrontation with the membranic Guardian. The one time he is rendered unconscious, the other he is taken in tow by three Guardians. As for the jet boat, it was taken under remote control by an operative in the Control Room, in the same way M. S. Polotska was sailed back to The Village at the end of ‘Checkmate.’ And in ‘Arrival,’ when Number 6 loses control of the helicopter, it was taken under control by an operative in the Control Room, and flown back to The Village remotely when Number 6 attempted his second escape. All of this makes the Mini-Moke the odd vehicle out, not having remote control capability!