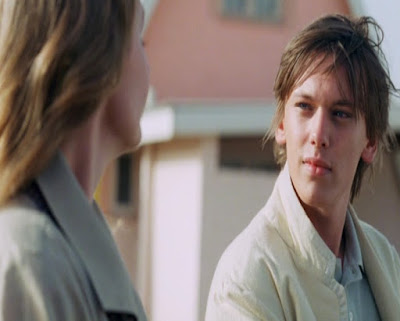 This is 11-12 spending a little time getting to know his mother M2. He is the reason why Helen and Curtis volunteered for The Village project, because they simply wanted a child. It would seem that for whatever reason, this was impossible for them in the outside world, that other place, that is New York.
But 11-12 isn’t like any other son, he was born of The Village. Not physically, M2 did not physically give birth to 11-12, he was created within his mother’s subconscious. Which bodes the questions, at what age was 11-12 born in ‘The Village, and how did he first appear? Perhaps one day 11-12 wasn’t there, and the next he was, as though he had been with Two all the time. It cannot be written that 11-12 was with his mother M2 all the time, because he wasn’t, M2 spent the majority of her time sedated in her bed. Being woken up only occasionally when Two wanted to spend a little time with his wife. To reassure himself that it was still possible to do so.
It is highly unlikely that 11-12 had a childhood, because he has no memories of his childhood. In the cellar of Palais 2 there are 11-12’s toys, a red lorry that Two said his son loved. But 11-12 has no memory of the red lorry, his other toys, or indeed any part of his so called childhood. He doesn’t even know his mother, that’s why in ‘Schizoid’ Two allows 11-12 to spend time with his mother, M2, in order to get to know her. And that works both ways, she does not know her son! At one point when M2 is spending a little time awake with her husband, Two, she has to ask him how their son is.
11-12 might be born of The Village, but he has an enquiring mind, he has a want to know more about the “other place,” it’s as though he is beginning to outgrow The Village. And tells his mother that he wants to go to the “other place.” “Oh I don’t think so” his mother tells him “Village is best for us.” Is it possible to go there 11-12 asks, well yeah it is, for some people, just not for him. But then why would he want to, when he has The Village? But 11-12 persists, especially regarding the holes that appear in The Village when M2 is awake. “Why don’t we leave?” he asks. Only some people can go there, to the “other place,” people who exist there, people that were brought o The Village, people that weren’t born in The Village, like 11-12. M2 sees The Village is enough, but for 11-12 Village is not enough! M2 is losing control of her son, if 11-12 leaves The Village, to try and go to the “other place” she will lose him forever. 11-12 would cease to exist. So perhaps that is how he simply appeared one day in The Village, as an adolescent teenager.
Village is best for us!
Be seeing you
Posted by David Stimpson at 08:33