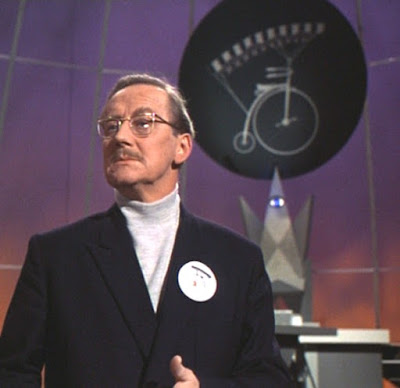 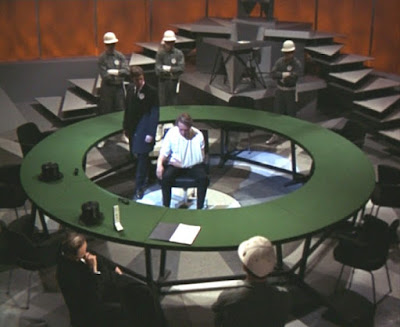 The Board of Education chamber with its purple and orange wall. The large disc with its canopied Penny Farthing {a variation on the design} attached to the chamber wall, or suspended from the ceiling. The chair, with its “dazzled” paintwork, appears to be a nod to German expressionist films of the 1920's. Then there’s the circle of green baize topped tables. The chamber is entered through a pair of steel doors, much the same with Number 2’s office.
The Board of Education chamber in ‘The General’ looks as though it could double up for the Committee chamber in ‘A Change of Mind,’ except there doesn’t appear to be the tall steps which lead down from the foyer of the Town Hall as there are in both the Committee Council chamber and the Council chamber. However if we take these three as separate underground chambers, then three large pits much have been excavated under the Town Hall during the construction of The Village. A fourth, if you include the underground chamber below the Labour Exchange!