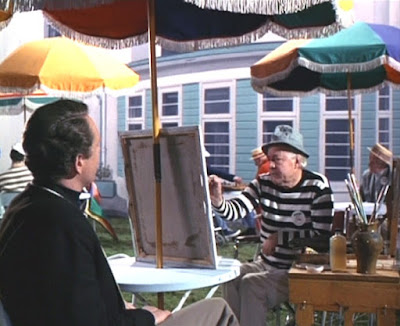 Why should Number 6 take the time to sit and have his portrait
painted? Number 6 is described as an eccentric because daily he climbs the Bell Tower, well it’s not simply because he likes the view! He does that because he’s still busy looking for a sign from his world, a light, a ship, a plane……. Perhaps in appearing eccentric to others, that’s why he liked to humour another eccentric, the artist Number 118. I shouldn’t think he was there to learn all about Jamming, seeing as Number 6 did a pretty good job of that in the previous episode. But perhaps Number 6 was surprised to hear the term “JAMMER,” given to his own activities of ‘Hammer Into Anvil’ by other citizens, who probably then followed in Number 6’s footsteps with their own jamming activities!
Was Number 118 really an eccentric artist? Well even if he was, in his painting he certainly caught the inner man of Number 6, the round peg in two square holes. Trust Number 6 to go one better than anyone else, seeing as it’s usually a round peg in a square hole, not two square holes!