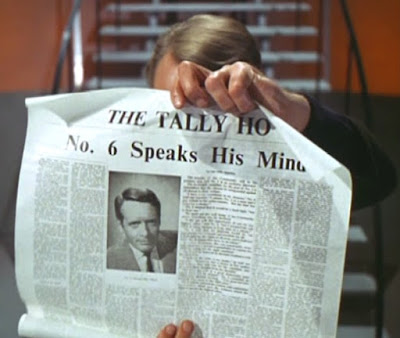 No.6 speaks his mind! You wouldn’t expect The Tally Ho to be able to print that, would you? And as it happens, what is written in the accompanying article to that photograph isn’t what he said to the newspaper reporter Number 113. Nor is the article what the newspaper reporter wrote in his notebook during an interview with the candidate Number 6, how could it have been? Seeing that only a few minutes after speaking with the reporter Number 6 was handed a copy of The Tally Ho by Number 113c outside the Town Hall containing an already written interview with Number 6! The security of the community will be his primary objective, that’s not Number 6 talking, its Number 2!  The author of the article is unknown, but goes under the title of “Our Own Reporter” who could be anyone. That’s because we don’t know who produces The Tally Ho, whether or not it’s an independent newspaper, or one controlled by The Village Administration. But largely speaking, it’s rather likely to be the latter rather than the former. And why use that particular picture of Number 6? It would have been more seemly if a photograph of Number 6 in Village attire had been used, complete with him wearing his number 6 rosette. But that’s the thing about The Tally Ho, no-one pictured on the front page, not even when its Number 2, are pictured wearing Village costume. But then only two people ever appear on the front page of The Tally Ho, Number 6 and Number 2! And mentioning Number 2, its quite surprising that The Tally Ho was allowed to print that article sub-headed “Security of The Community,” what amounted to be the ravings of a delusional paranoid! Or was he? After all there were dissidents in The Village, Jammers, and in the following episode an interim Number 6 had a list of malcontents, top of that list was Number 6!