Creation Out Of Destruction! 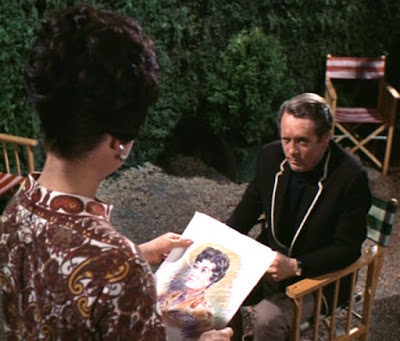 It’s Number 6 at one of Madam Professor’s art seminars, how very odd! Madam Professor asks Number 6 if she can help him. He doesn’t know, and asks her if she can. She asks him if he’s finding things a bit strange, the trouble is he can’t find anything at all! But apparently Number 6 is a dab hand at sketching, and produces a picture of Madam Professor in a General’s uniform, that being his particular subject, military history, Generals and that kind of thing. The drawing of Madam Professor is not altogether flattering. Is that the only reason she tore the drawing in half, or is it because by that time she must have hated anything to do with the General, even to the point of hearing the name mentioned!
As for the tearing up of the drawing, perhaps there’s some symbolic meaning in that. For as Madam Professor would say, she’s creating a fresh concept. Construction arises out of the ashes of destruction! In other words, for something to be made better, the General must first be destroyed!