“He is me, we are me,” 70 tells Six, who is undergoing therapy, giving the Talking Cure a go. 70 finds it conducive to work this way, with himself in the light, while his other self remains in the shadow. The one engages with the patient, while the other reflects. 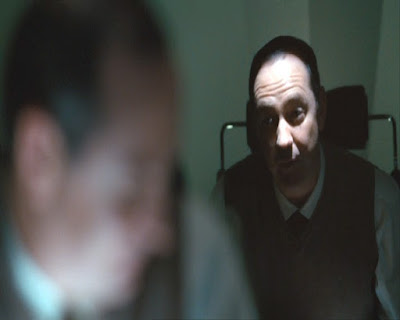 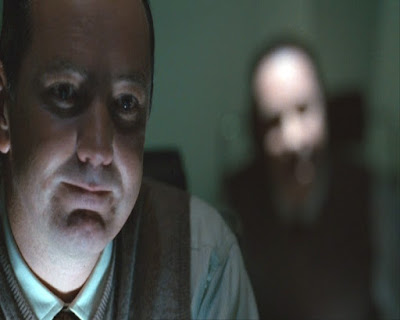 Doubles in The Village of the original series, or perhaps that should be identical twins? The gardener and electrician, the photographer Number 113b, and The Tally Ho vender Number 113c, even Number 6 has a double, even doubles. In ‘The Chimes of Big Ben’ when Number 6 is asleep in his bed, one double is seen standing on the balcony of the Green Dome. Then later just before Number 6 is leaving the Green Dome, his double is seen again standing on top of the stone Bandstand. What about Curtis? I’m not counting him, he’s just a look-a-like! But there is Number 1, he’s supposed to be the alter ego of Number 6, and vice versa. The other thing about identical twins, or doubles, apart from 6 and Curtis, 1 and 6, the others never meet! Oh Number 113b and his double Number 113c did see each other, but they were not together. And as far as we know the gardener and the electrician are not seen together, certainly not in ‘Arrival’ anyway. Come to think of it, we don’t see either of them again after ‘Arrival!’ It might be that they are two sets of identical twins, or doubles who have come to terms with each other, so much so that they can live in The Village without even having the slightest contact with each other. It could always be that 113b and 113c are the alter egos of the other, the same with the gardener and electrician. But unlike Number 6 and Number 1,they exist together in The Village, having come to terms with themselves that they now live in harmony together. Perhaps if Number 6 could come to terms with himself, he and his alter ego Number 1 could learn to live with each other. And perhaps achieve peace of mind!