60 Second Interview with The White Queen 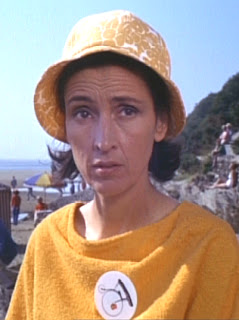 No.113; “So Number Eight, you were hypnotised.”
No.8: “Don't be ridiculous!”
“Hypnotised into thinking you were in love with Number Six, and he with you.”
“You must be crazy!”
“Yes, that's what Number Six said! And you have helped others to escape the Village?”
“Well everyone tries to escape when their spirit's broken.”
No,113b “Smile” click goes the camera.”
“But none of then ever succeeded!”
“It was their plans.”
“Plans?”
“They weren't good enough.”
“Not with you helping obviously!”
“What are you insinuating?”
“That No.6 wasn't the first you have betrayed.”
“I haven't betrayed anyone!”
“No of course you didn't, after all you were hypnotised at the time.”
“Look I think you had better go.”
“Yes, I think we better had.”
No.113b: “You're an idiot.”
No.113: “Why?”
“She could have helped us escape.”
“Haven't you been listening? Number Eight betrayed all those she tried to help escape, that's why none of them ever succeeded!”
“Not so attractive has her predecessor either, this new Number Eight.”
“But they have something else in common.”
“What's that?”
“They both betrayed Number Six.”
“True. Coffee?”
“Yes, and it's your turn to pay.”