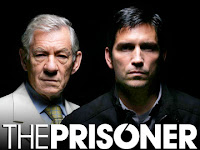 I know what you are thinking, what's he doing writing about this series again, hasn't he had enough?  Well perhaps you should give the series a second chance, and that's not the first time I have suggested that to fans of 'the Prisoner.' Other people who have taken my advice have found value in THEPRIS6NER having watched the series a second time. In fact it took me a second screening before I could get into the series, I mean to appreciate the series. But then I began to watch the series with an open mind, and not with a fixed opinion that I'm not going to like it simply because it's not a remake of the original series.
As it so happens, when a friend of mine who is also a life-time fan of McGoohan's 'the Prisoner,' had first watched THEPRIS6NER I asked him what he thought of the series. He told me that he didn't like it, didn't dislike it, he said he was "indifferent" to the series. This is what Leslie, had to say for himself after watching the series for a second time.  “Me and my friend John have recently watched the new series of THEPRIS6, and I've got some wonderful news for you: I've been working on questions from the new series. I got more out of watching THEPRIS6 a second time. I now understand it's not meant to be a sort of carbon copy of the original series.  I got the new series on the brain and some questions popped into my head and I just had to write them down before I forgot them. They are all cracking questions: there's about 17 of them."

You see it's as I've always said about THEPRIS6NER, it takes a second screening to actually appreciate the series. So if you have an open mind, give the series a second chance, and you might just discover what others are discovering, and what you have been missing!