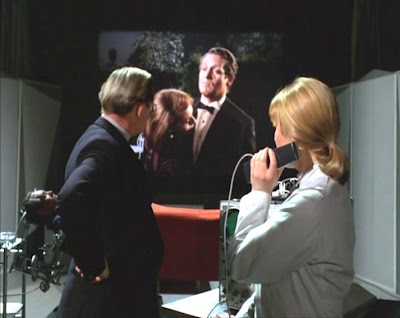 In 'A B and C' a doctor, who has developed a drug which enables them to get into No.6's dreams. More than that, to manipulate those dreams by putting words inside his head.
Doctor "Shall we have some more?"
'B' "Shall we have some more?"
No.6 "More?"
Doctor "Champagne?"
'B' Champagne?'
No.6 "Not just now."
This is called Inception, you will probably recall the film starring Leonardo DiCaprio. The film was directed by Christopher Nolan, the film director who was to have directed a film based on 'the Prisoner' in the late 1990's. However that film project never saw the light of day. So perhaps Nolan saw the film script for Inception as having the essense of 'A B and C.' It's good to see that an episode of 'the Prisoner' possibly inspiring a film. Although I have no evidence that it did. No more than 'A B and C' was inspired by a scene in the television serial 'Quatermass and the Pit'!

BCNU
Posted by David Stimpson at 08:09