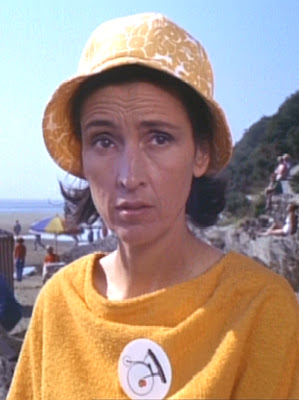 Ah Number 8, the woman who had often helped others with their plans for escape, but none of which ever succeeded! And so it proved to be with Number 6's plan, and yet the failure of his plan was nothing to do with this woman. Her only failure was to allow Number 6 to take her locket which held the "reaction transmitter." This picture was taken from the last time we see Number 8, her failure was enough to see her wiped off the board! Originally Nmber 8 was to have gone with Number 6, to have both been picked up by the crew of M.S. Polotska.
The idea was that Number 8's emotions would betray Number 6, if she was going to lose him, if he was going to escape, and send an alarm to control. But that relied upon Number 8 wearing the locket. Had she still been doing so, then there would have been no need for the Rook to betray Number 6 instead of the white Queen!
What happened to Number 8? Who can say, but one thing is known, her number 8 badge was made up from that of a two diit number. See how the 8 is off-centre of the penny wheel. Meaning the first digit, 1, 2 3, 4, 5 or whatever, had been tip-exed out!

I'll be seeing you
Posted by David Stimpson at 08:40