Once Upon A Time!

I used to collect die-cast models of vehicles seen in 'the Prisoner,' I also built a model of the Lotus 7 with my own hands. So much so, that I know every piece of plastic, every drop of blue, every stroke of the brush! Also I made a model of the cage from 'Once Upon A Time' which was to scale so that it would sit on the trailer of a Scammell Highwayman Transporter.
However in more recent times I have been collecting die-cast model cars from THEPRIS6NER, and one day I found the model of an Isetta, or the "Bubble" car as it is known here in Britain, and seen here in THEPRIS6NER. 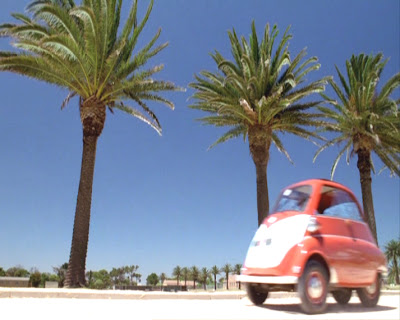 Now a friend of mine payed us a visit some time ago, and he has an interest in classic and vintage cars. So he was looking at my collection, and we were discussing the Isetta, and he made the observation that it has four wheels, when the more usual model of the 1950's and 60's have only three wheels. So we checked the Isetta in THEPRIS6NER episode 'Harmony' and by coincidence this Isetta, pictured above, has four wheels!