You know that moment during Many Happy Returns when the door to No.6's cottage opens, and Mrs Butterworth-No.2 walks in carrying a birthday cake with 6 lighted candles on it for No.6.
Then why not accompany that scene with the tune "Happy birthday to you, happy birthday to you....." After all that piece of incidental music had been adapted for that scene, I heard it played on the third cd of ‘the Prisoner’ disc set. So why wasn't it used I wonder? That piece of music would have suited the scene very well I think. 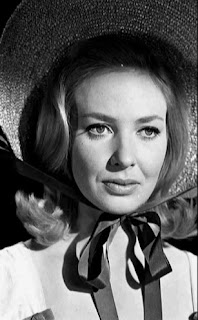 But when a goat like No.6 comes to the village, it can only lead to trouble within the flock

Mirror Mirror
If things were not bad enough, they have now taken away the new identity of No.6, that which they once gave him. It really makes one doubt just exactly who one is, doesn't it? 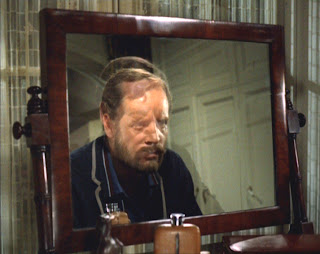 So No.6, what do you see in the depths of the mirror?
Be careful No.6, and take heed because you may not like what you see.
It's quite chilling isn't it, the two faces of No.6 are revealed!
It's rather like the strange case of Dr. Jekyll and Mr. Hyde, wouldn't you say? Until finally the face of his other self is finally revealed, his Mr. Hyde to Dr. Jekyll.
And what's more, he looks tired and drained, as though he's been put through the mill more than once!

Curtis Before His Transformation Into Number 6
Is this how Curtis looked before he went through the transformation to make him look exactly like Number 6? 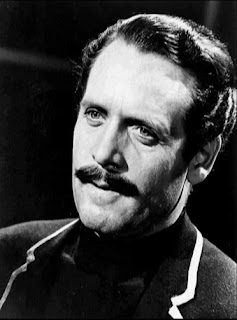 I don't see why not, after all No.6 went through a transformation to make him look like someone else, why shouldn't that someone else be Curtis? In fact I can see the irony, if indeed this is the case.

Number Nothing!
During their, shall we say deliberations, No.2 found himself locked in the cage, with No.2 having found himself changed places with No.6, who then directs the Butler to unlock the door of the cage, which is something No.2 fears. "You're free!" No.6 tells him. "No, I'm No.2" he shouts with defiance. "You are number nothing!" No.6 sneers in reply.
So what about this Number Nothing, if No.1 is the figure head for the village, Number Nothing would not actually be No.2, who No.6 described as being less than a number! But nothing is a number, nought or Zero, and that could be the collective members of the Assembly.