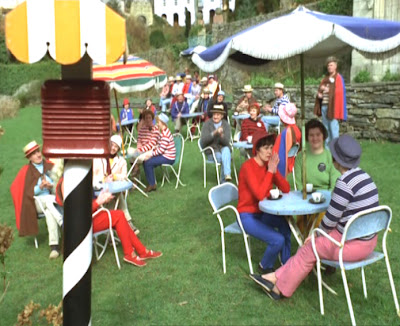 Villager "What are we applauding?"
Another Villager "I don't know. We're told to sit here, in a gathering, and applaud."
Villager "Clap our hands you mean?"
"Yes, that's what the director told us."
Fourth Villager "I think we are supposed to be listening to music."
"I can't here any music."
"No neither can I. What are they up to?"
Fifth Villager "Are we listening to classical music?"
"What difference does it make?"
"I don't like classical music!"
"Well listen to whatever music you do like!"
"I think they will add that to the film later, I think it will be the Brass Band playing."
"But the Brass Band isn't playing!"
"The band is miming to the music that will be added to the film later."
Sixth Villager "I think we shouldn't question what we do. I thik we should just do what they want, take the money and smile!"

BCNU
Posted by David Stimpson at 07:30