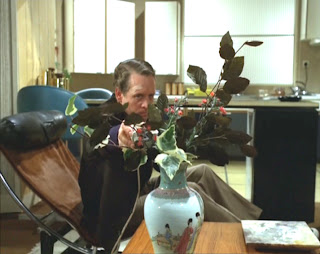 The Observers failed to observe No.6 pouring away his tea into the vase. Seeing that the doctor No.86 was looking after No.6 personally, perhaps it was thought that Observers were superfluous to the situation. Mind you there were times when No.2 was watching. And yet as television viewers, when the series was first screened, were we meant to see this? 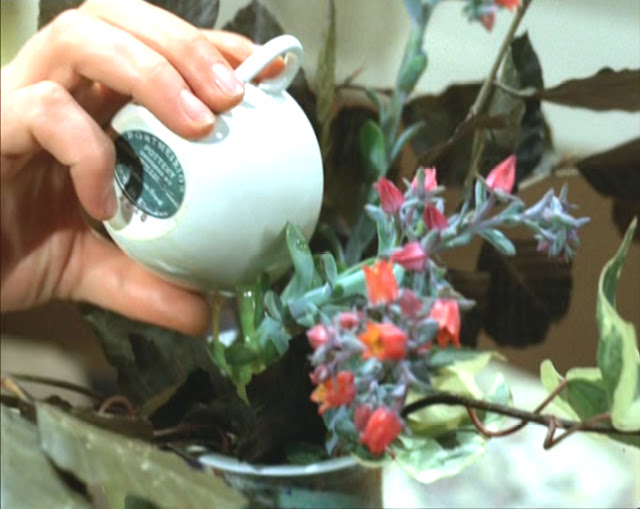 The pottery stamp of Portmeirion on the bottom of the cup! It has been said that Patrick McGoohan didn't wish to give away the actual location of the Village until the concluding episode. And yet he couldn't seem to help giving clues to the location of the Village, like this one. And of course the name of Portmeirion appears on the envelope in 'Do Not Forsake Me Oh My Darling.' I know that the bottom of the cup is on the screen for but a few seconds, making it difficult to see on the screen. And yet the camera does zoom in on the label, thereby giving the television viewer a better chance of seeing the label, even if only so briefly!
However to some viewers the location of the Village would not have been a secret, not if they had been to Portmeirion on holiday. Even to have visited the Italianate Village while filming had been taking place. Unlike today's film sets, Portmeirion was not a closed set. One of the provisos for being able to film in Portmeirion, besides the cost to Everyman Films, was that life in Portmeirion was to go on as normal for both Portmeirion, and the guests staying there during the time filming took place. They were not to be impeded in any way.