It's All In The Production 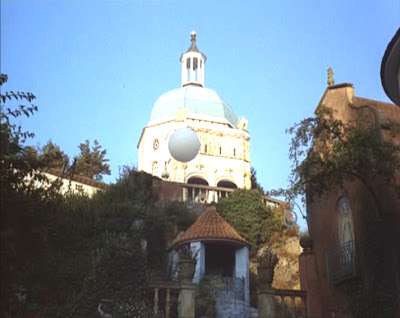 Propsman Mickey O'Toole tells when for another shot, the helium balloon of the Village Guardian, gave him more trouble.
"On this particular daythe shot required Rover to start from point A and go right up to the Dome and come down to point B. It had to go in quite a decent run from ground up and would follow it. Let me remind you, half of these shots never appeared in the series. I don't know why, 'cause I spent half the day trying to get them ready.
They were all Pat's idea, or the directors idea and they never probably made the episode, but anyway, we've done out best to get them ready.
So this particular shot required the balloon to go up and down. So Pat just put it on me like that again. He said: "I've got another little job for you, Mickey." I said "Oh, another one of your little jobs. What is it?" He said: "I want the balloon to go from A to B." I said : "How long have we got?" He said: "About five minutes." I said: "Wait a minute - I've got to work it out. I've got to fill the balloon with helium to get it off the ground. We've got to string it up and do the business."
Anyway we did, and we got the shot to work and it was a simple shot with two nylons on the same balloon. One nylon held it here and released it and the other one controlled it in descent or assent to the Dome - and then I released it from my side and the other guy pulled it down his side. It was a simple thing, but looked like an enormous task in the beginning - but was so simple.
A lot of these jobs are so simple it's not true really. If you sit down and just think about it for the moment. But it worked fine and he was delighted at the finish, and he said: "Well done! Now we're over here now, Mickey, and we want so - and - so......" And that forgotten about completely - and there you are trying to roll up the nylon, trying to stop it from tangling, and getting it ready for the next shot. That was another thing - he said: "The nylon is costing a lot of money, isn't it?" Because you'd have to cut it when it got tangles up and get rid of it. "Do you want more nylon, really? Because they were expensive in those days, reels of nylon." 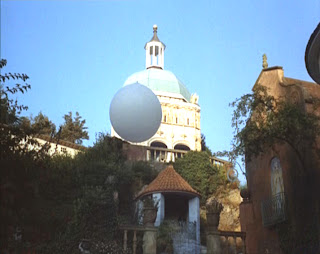