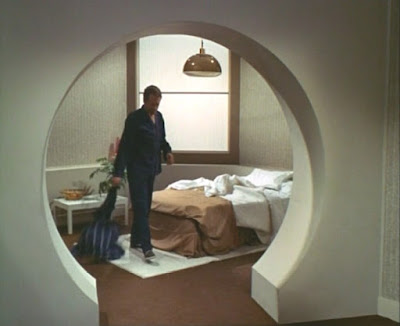 Number 6 can make even the act of putting on his dressing gown appear as a gesture of defiance. And it works, because it appears to annoy Number 2! Perhaps Number 6 himself is annoyed by the music playing through the black loudspeaker!
During ‘The Chimes of Big Ben’ Number 6 is in the dinette, and about to boil two eggs for his breakfast. This could be his regular breakfast, seeing as the next morning Nadia boils two eggs for him. Mind you there are times when he has bacon and eggs {2 eggs} for breakfast, with toast and marmalade, and tea with lemon. At one time he enjoyed some international cuisine, Quiche with a poached egg on top. And at one time he enjoyed pancakes for breakfast, but this variety of cooked breakfasts was only when others cooked it for him!
However I digress, back to the music playing through the black loudspeaker, the replacement for the one he trampled to pieces underfoot in ‘Arrival.’ And judging by the way he stares at the loudspeaker he’s annoyed with the music. But he knows that good old fashioned brute force will avail him nothing. Smash it to pieces and the electrician will only bring another one to replace it. I always enjoy the more subtle way Number 6 deals with the loudspeaker. Because obviously an idea has struck him, to place the loudspeaker in the refrigerator, hence bringing peace and quiet to his cottage! It’s a scene which Number 2 finds fascinating.