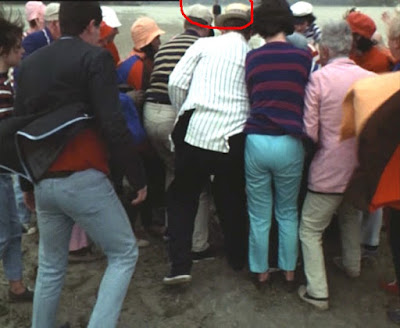 The students in having run the Professor to ground, are busy picking him up. But who is the figure, at the top of the picture, standing at a distance watching the scene? It looks like it could be Number 6, only at this moment he’s in the company of the two prefects on the beach, having been found playing truant. Might it not be Number 12, who had been waiting on the beach to meet with the Professor? My idea being that The Professor was to have met with Number 12 in order to give him his tape recorder, containing his message about Speedlearn and the General. But the students having chased, and caught the Professor, made that meeting impossible. However before the Professor was caught, he buried his tape recorder in the sand. Number 12 would have seen that. He would have seen Number 6 find the tape recorder in the sand, and then bury it again, having been found loitering on the beach. Hence Number 12 returned later to the beach in order to retrieve the tape recorder himself. And we know how the episode progresses after that. Number 12 and Number 6 become confederates in the cause against both Speedlearn and the General.

BCNU
Posted by David Stimpson at 08:28