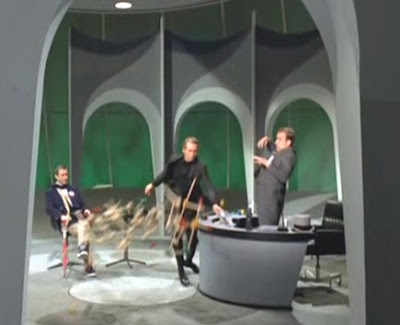 Number 20, the manager of the Labour Exchange asked the Prisoner to fill in a questionnaire. In a later episode he was  to fill in a written questionnaire, that time he tore it up into small pieces. In this case however his response was more of a violent nature, something akin to throwing toys out of a pram! Whether it was the build up of questions asked by Number 20 that caused this response, or the last question in particular “Any politics?” is unknown. But if all the manager of the Labour Exchange has to do all day is tinker with a building toy, well if he’s got nothing better to do with his time, its no wonder Number 20 was eventually taken out of the Labour Exchange and given the position of assistant to Number 2!
The toy lies broken in pieces on the floor, and all Number 20 can do is busy himself putting it back together. He certainly doesn’t appear to take any notice of what Number 2 tells him about the Prisoner’s file. But if Number 20 can get all he needs from the file, why bother with an interview with the Manager in the Labour Exchange in the first place? Probably because it’s not about the persons there, but more to do with the aptitude test in which the square is circled, a more difficult thing to do than squaring the circle. Something Number 2 finds amusing if not the Prisoner.