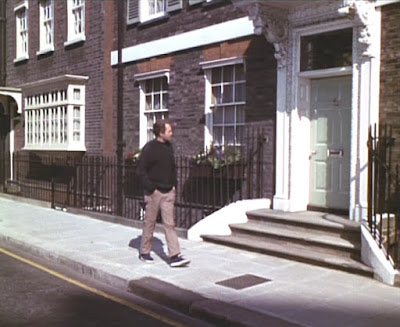 The Prisoner finally manages to return to London, and his home of No.1 Buckingham Place. When I first watched ‘Many Happy Returns’ back in 1967, I was truly happy for him, especially considering the disappointment during ‘The Chimes of Big Ben.’ But I thought it unwise for him to go running back to his ex-colleagues a second time, after all, once bitten forever shy and all that. Because how did Number 6 know it would be the Colonel and Thorpe, and not the other Colonel and Fotheringay he would encounter at the country house? I suppose that scenario was never considered, and besides who else was there to help Number 6, other than his ex-colleagues…….the Russians perhaps?
What’s more, fictionally speaking, its lucky for Number 6 that while he was walking up and down outside his house, that Janet Portland didn’t come walking along the street, as she had in ‘Do Not Forsake Me Oh My Darling’ when she saw his car parked in the road and so went knocking on the door of his house. Then there would have been some explaining to do. More than that, Janet might well have seen Mrs. Butterworth driving her fiancés car, and possibly going into the house, and that would have led to even more explanations. And even panic if ZM73 was due to arrive!