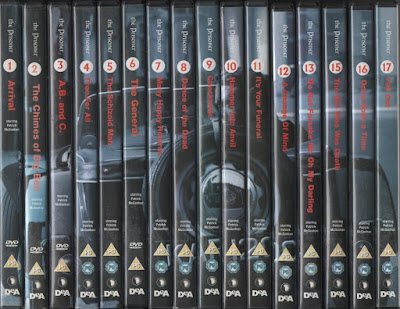 Yesterday morning I had occasion to go out and about shopping. And as it happened I called into one of the many charity shops in the town. As I perused the DVDs on the shelves, the whole collection of the ‘Danger Man’ de Agostini DVDs 18 to 49 caught my eye. Then at the counter a young man was purchasing the Prisoner de Agostini DVDs as pictured above. I wouldn’t have taken any further notice, if it had not been for a singular occurrence. The young man was disappointed that disc 14 was missing from the collection. Disc 14 being the episode ‘Living In Harmony.’ As the assistant busied herself putting the discs into each cover, the young man asked her if disc 14 had been left in the back room, and not put on display with all the rest. But the assistant assured the customer that disc 14 was missing when the Prisoner and Danger Man de Agostini DVDs had been donated to the charity shop. I had a secret sympathy with that young man, and understood his disappointment. Because that’s how I had purchased the de Agostini Prisoner DVD’s a few years ago, minus ‘Living In Harmony’!