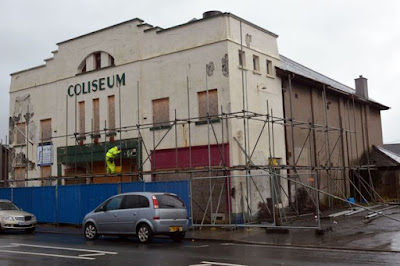 
I read this evening on the BBC digital service that the demolition of the Coliseum cinema at Porthmadog began on Monday February 22nd.

The Coliseum cinema in Portmadog has a place in the history of ‘the Prisoner,’ as it was there that the daily film rushes of the filming of scenes at Portmeirion, were screened for the Production crew in both September 1966, and again for a second shoot in March 1967.
It was during the late 1980's into the mid 1990's that Bob Piercey would again act as projectionist for ‘the Prisoner’ at the Coliseum, when screenings of two episodes from the series had been organised as part of ‘the Prisoner’ conventions held at Portmeirion.

Be seeing you
Posted by David Stimpson at 18:12