There are parallels between ‘The Magic Flute’ and ‘the Prisoner.’ Mozart’s opera is noted for its Masonic elements, and it is possible to see the delegates of the Assembly in ‘Fall Out’ as being part of some Masonic organisation. The wearing of masks and robes can be interpreted as being ceremonial.
A very brief summary of ‘The Magic Flute’ follows.
Act 1

In ancient times, in Egypt, this is an imaginary story. Prince Tamino is attacked by a big serpent. But, three ladies who are the servants of the Queen of the Night save him. Three ladies show him a portrait of the queen’s daughter, Pamina, and Tamino falls in love with her even though he has not even met her. The Queen of the Night promises her daughter to him, if he can rescue Pamina who is enslaved by the evil Sarastro. Tamino decides to rescue her, and is given a magic flute by the three lady servants. There is a man, Papageno who is a bird catcher. Incidentally, he follows Tamino, and is also given magic bells by the ladies. By the power of the magic flute and bells, Tamino finally gets to meet Pamina. They fall in love with each other immediately. In fact, Sarastro is not an evil man, but a high priest. He has protected Pamina from her mother who is filled with ambition to dominate the world.
Act 2
Sarastro imposes three tests on Tamino to get his lover, Pamina. The first test is “Silence.” When Tamino falls silent, Pamina who knows nothing feels sorrow, but they can endure this test. The second test is “Fire,” and the third test is “Water.” They can overcome these tests through the power of the magic flute.
In addition, Papageno is also tested to get his unseen lover. Papageno is not able to endure the tests. He can’t pass his tests. However, he can meet his lover, Papagena through the power of the magic bells. Papageno falls in love with Papagena. On the other hand, Pamina’s mother, the Queen of the Night is furious. She tries to break into the temple of Sarastro. But, she is hit by a thunderbolt, and goes to hell. In the end, Sarastro blesses Tamino and Pamina for overcoming their tests.
In ‘the Prisoner’ Number 6, the hero, is put to several tests both mentally and physically. First his aptitude in which the square is circled. Then his skill is put to the test as he attempts to escape The Village, but is thwarted by the Guardian which protects The Village. During ‘The Chimes of Big Ben Number 6’s woodworking skills are tested as an escape by water is formulated. Later he is tested by silence as one morning 6 wakes up to find The Village deserted, and turns to his woodworking skills once more, and is tested by water as he takes a voyage of discovery. And later comes under fire from the Girl Who Was Death, and eventually defeats death. Number 6’s truth is tested, a situation in which he tries to lie his way out of, but cannot help himself but to tell the truth. Yet they knew the truth in the first place.
So if Number 6 is the hero {Tamino} a young prince who sets out on an adventure to find and rescue his princess, who is Monostatos? Monostatos is the mean and greedy servant of Sarastro. He’s not really loyal to anyone and goes after anything he wants! That would be Number 2 who if not given what he wants, he takes it. Who then is Pamina the damsel in distress? There are a number of candidates for the role of damsels in distress, the maid Number 66, Nadia, but they turn out not to be as they first appeared. Then there is ‘C’, Madam Professor, Number 73, Monique, and finally Janet Portland.
Sarastro could be Number 2 the bad guy, he is in fact a high priest, as Number 2 was once an influential man, but as the series progresses we may change our minds about him.
Number 6 faces other tests, amongst them his appearance is altered and appears to be someone else, two times six being Number 12. Who then undergoes a second alteration, and is faced with himself and forced to prove his identity. An identity Number 6 struggles to keep hold of, as he is outwitted by his other self, and betrayed by Alison.

‘Dance of the Dead,’ here we meet a female Number 2 who might be described as the Queen {pictured left} with Number 6 and three young, attractive, and unattached ladies as Number 2 tries to match
Number 6 up with a girl for Carnival, just as there are three attractive ladies in attendance to the Queen in ‘The Magic Flute.’ But there is always Number 240 who pays attendance on Number 2, and may be described as Number 2’s sidekick.
The Prisoner is eventually put on trial, his crime the possession of a radio. He had no radio of his own, there is no radio he could have borrowed, so when acquiring one from the dead man {Number 34} one might ask where he acquired such a radio? The Prisoner is found guilty of his crime, and sentence d to death. The accused has been sentenced in the name of the people. The people carry it out in the name of justice, such is the screaming mob who chase the Prisoner through the Town Hall. It could be interpreted that the Prisoner eludes death, but in reality, if there is reality, that the sentence of death was commuted to life in imprisonment. But it must be remembered that originally ‘Dance of the Dead’ was to have ended with everyone taking part in a frenzied dance, with everyone having died, everyone but Number 6 who may well have become death itself!
After a game of chess in which both sides look alike, the Prisoner learns of a way to distinguish between the prisoners and the warders, and decides to put it to the test. And it might well have worked, had not the Rook put to the Prisoner his own test. But the Rook fooled himself, and the chance of escape was gone!
You must be hammer or anvil, and Number 2 seeing the Prisoner as the anvil is going to hammer him. This is a one to one ordeal despite the presence of the loyal Number 14. As for the Shopkeeper and the Supervisor, they have their entrances and exits as they play their parts, but it is Number 2 and the Prisoner who take centre stage. But Number 2 is a weak link in the chain of command and is filled with paranoia seeing enemies and conspiracy everywhere. It is a weakness that the Prisoner is able to take advantage of as he turns jammer in his struggle against Number 2, who can trust everyone, but who trusts no-one, not even those closest to him. Number 14 is vanquished in a violent and physical struggle, and Number 2 is left broken, a man of fragments one might say.
The Prisoner then becomes embroiled in one of Number 2’s machinations, in particular Plan Division Q. A retiring Number 2 is to be assassinated executed. So where is the test here for the Prisoner? It is to see if he can counter Number 2’s machinations, and save the good citizens of The Village from any such mass reprisals that might occur brought about by the apparent assassination of an out-going Number 2. Otherwise why involve Number 6 in the first place? Surely they must realise that any plan which involved Number 6 never once succeeded!
There are other tests which take place, when the Prisoner is posted as being unmutual and faced with the prospect of undergoing the ordeal of Instant Social Conversion, but with the aid of Number 86 {Pamina the heroine} is able to turn the tables on Number 2. 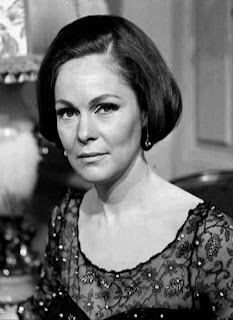 Another love interest is between the Prisoner who becomes known to be ZM73, and Janet Portland {Papagena} {Pictured left}. Released from The Village after a year, Janet doesn’t recognise her fiancé, because he appears to her in the form of another man, the Colonel. But ZM73 gives Janet a message, one that only he can give her. Janet Portland is the most unfortunate of women, for she loses her lover not one, but twice!
Put the Prisoner in a dangerous environment, give him love, take it away. Isolate him. Make him kill, then face him with death and he’ll crack. But the Prisoner is made of sterner stuff, and Number 8 made a miscalculation, the fact that the Prisoner could separate fact from fantasy so quickly.
And then Decree Absolute, it’s make or break for Number 2 {Sarastro}, and is just as much an ordeal for him as it is for the Prisoner, but which ultimately costs him his life. We think Number 2 is the bad guy, but in this episode we come to like him, just as Number 2 began to like the Prisoner.
But now the silence if over, and the man once known as Number 6 is permitted to make a statement which could only be his, but for them. And yet as the hero takes the stand and begins his speech he is shouted down. He stops and begins his speech again, but the result is the same, he is shouted down “I I I I I I I I I I I I I.” Thrice does the Prisoner attempt to make his speech, but the delegates of the Assembly have no wish to hear one word the Prisoner has to say. Which is surprising really because after going to all the trouble to try and extract the reason behind his resignation, one would think they would want to listen to what the Prisoner had to say for himself.
The end to the string of tests and the overall ordeal is brought about by violent revolution, and ends in ESCAPE. As for Number 2, our opinion of him has changed, we like him as he turns out to be a good man after all. But as for the Prisoner, his ordeal is about to begin. As upon returning to London, to the Village of Westminster to be more precise, his first action is to go and hand in his letter of resignation, the scourge of all his troubles!
I freely admit that in the writing of this article, there are some aspects which have had to be, shall we say, shaped to fit. But is that not the way of ‘the Prisoner,’ that some parts of the puzzle have to be rough hewn to fit?