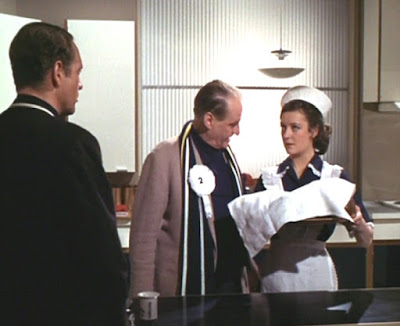 The impression is given that the maid Number 58 arrives at ‘6 Private’ with Number 2. The fact that he places two cups on the work top is suggestive of that. However the maid enters, carrying a breakfast tray, a few moments after Number 2. Of course Number 2 would have seen the tractor approaching, and knew Number 6’s breakfast was being brought to him. Hence his getting two cups ready for tea. Why doesn’t he have a poached egg on quiche like Number 6? Probably because it’s only Number 6’s breakfast which the maid has brought, and Number 2’s probably had his already. Unless that slice of toast with marmalade is his breakfast!
Although we do not see it, Number 58 may well have brought Number 6 his breakfast via the same mode of transport as the maid Number 56 in ‘Dance of The Dead,’ sitting with two other maids in a trailer pulled by a garden tractor! The only problem with that would be, by the time the maids reached their designated cottages, the breakfasts would be cold! 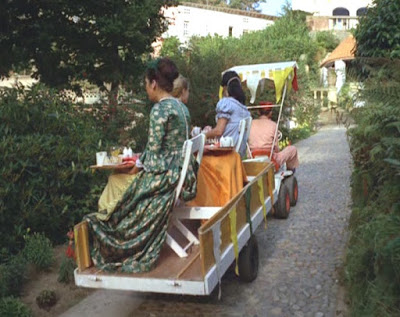 Originally, according to the film library order of ‘the Prisoner,’ ‘Dance of the Dead’ was supposed to have been the second episode in the series, and ‘Free For All’ the third, and ‘The Chimes of Big Ben’ a much later episode. And if that had actually been the case in the screening order, the fact that Number 6 was about to boil himself two eggs, perhaps demonstrates that the privilege of having his breakfast brought to him on a tray by a maid, had been removed by the time of ‘The Chimes of Big Ben!’