takes place over three years, 1966 to 1968!
I don’t expect ITV to screen the series either on ITV1, 2, 3, or 4, as I think Network DVD will be issuing another ‘Prisoner’ box set, always an easier thing to do than bother to actually screen the series on television, and to include the commercial bumpers. But I’ve already got ‘the Prisoner’ on video from ITC Precision Video of 1982, and onwards. Not to mention the times I’ve collected ‘the Prisoner’ releases on DVD! So I guess I’ll be left to watch the series with via video or DVD to celebrate the 50th anniversary. But it doesn’t sound all that exciting does it? After all I can watch the series any time I like. I could always juggle it about a bit, watch the “alternative” ‘Arrival’ and ‘Chimes of Big Ben’ instead of those two regular episodes, and watch the series in the library order instead of the screening order. Or mix all the episodes up to my own particular screening order.

For this year2016 I could watch all ‘the Prisoner’ production videos which were produced by Steven Ricks between 1990 and 1994. From the two volume video of ‘the Prisoner’ investigated,’ through to ‘the Prisoner’ 6 in-depth tapes. Then ‘the Prisoner Inspired,’ ‘In Production,’ and ‘In Conclusion.’ Which contain numerous interviews with actors, actresses, and production crew members. And do contain some rare and at the times, unseen production film footage. And ‘the Prisoner In Conclusion’ video, hosted by Norma West, with cameos by actors Norman Mitchell, David Arlen {Karel/Post 5 in Chimes of Big Ben} and James Bree. Because what Steven Ricks did was undertake a most ambitious project, in that he partially filmed dramatisations of an unshot scene from ‘The Girl Who Was
Death.’ The location for which was supposed to be Hampton Court maze, but was filmed at another location. I’m not sure if all the readers of The Tally Ho are aware of this, so here is a short synopsis.
Originally this episode was to have been a 90 minute feature episode of ‘the Prisoner.’ However dramatic cuts were made to the original script, and the episode was chopped to the regular 50 minutes. So what was contained in those cuts? Well some three and a half pages, of an entirely self contained scene were scrapped, from the point where Mister X was in the boxing ring of Barney's Boxing Booth and the Polish giant Killer Kaminski had told him to go to the Tunnel of Love. Originally Mister X was told to go to Hampton Court Maze. He quickly finds the maze, and the following bizarre sequence unfolds.
Mister X meets with a jovial showman wearing a waistcoat and bowler hat, standing at the entrance to the maze, who is mumbling something incoherent and then he laughs to himself. Mister X enters the maze which looks innocent enough, but he is not prepared for what he is about to encounter around the next corner.
The maze is suddenly replaced by a tropical rainforest. The air is filled with exotic bird song and wild screeches. It is not long before he is attacked by a New Guinean head hunter brandishing a machete. But Mister X makes short work of the native, disarming him of the machete in the process. 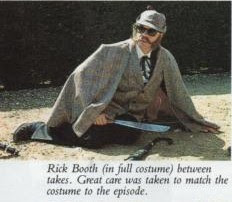 Continuing his exploration of the rainforest, he is stopped dead in his tracks by the roar of a lion, which turns out to be a Tabby cat. Now deeper into the rainforest Mister X is instructed by a passing parrot to turn thirty degrees left. With nothing to lose he follows the parrot’s instruction, only to find himself back in the maze!
Mister X continues to tread carefully paying little attention to the gardener spraying insecticide onto the maze’s well tended hedges. As he draws closer he sees the gardener is, dressed in grey overalls with two metal canisters strapped on his back, the one labelled insecticide, the other homicide! The gardener tries to spray Mister X, but using the machete he took from the native in the rainforest, he knocks his assailant to the ground and piercing one of the tanks strapped to the gardeners back, sends him shooting off into the distance like a rocket! 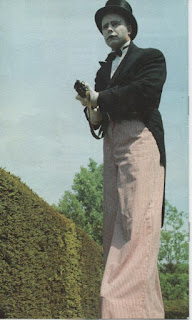 After regaining his composure, Mister X encounters someone standing over him, a figure of some twelve feet tall. It is in fact a man with a painted face of a clown, wearing a top hat and tails, on stilts, and armed with a sub-machine gun! He picks himself up and a chase ensues through the maze, as he ducks and dives to escape the hail of bullets fired from the sub-machine gun, as the stilted walker uses his elevated height to trap his quarry. Before long he stumbles into the centre of the maze where he finds suitable cover to hide from his pursuer. Unable to locate his quarry, the stilted man is unaware of what is happening to his feet, as Mister X ties the man’s shoelaces together, causing the stilt walker to come toppling to the ground.
Now desperate to leave the maze, Mister X hacks his way through the hedge using the machete, and finds himself back in the fairground where he is told off by a disapproving mother. The little boy she has in tow with her is holding a balloon on which a message directs him to the Tunnel of Love. The balloon suddenly explodes........BANG!
The above is an interesting scene, and would have been visually exciting. But perhaps it would have been one scene too far for ‘The Girl Who was Death!’
I think it would be an enjoyable experience to watch these video tapes again, after all they have been in my collection for many years, and it has been a while since I last watched them. And a rather novel way to celebrate the 50th anniversary by delving into ‘the Prisoner’s’ production, rather than the seventeen stories that go to make up the series, which is so familiar.
And I have to add that if it were not for Steven Ricks’ sterling work back in the early to mid 1990’s all the material gathered and presented on the video tapes below, would have been lost for all time. 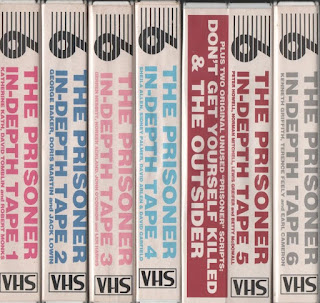 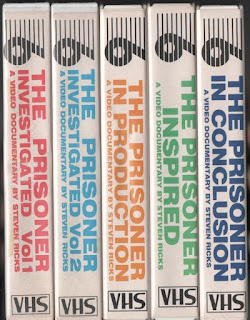