What they do these Jammers, is talk, they talk about the plots they’ve been hatching. Escapes mostly, but plans and developments for all kinds of mischief. They do it to confuse the observers. But the plots they talk about are always make-believe, nonexistent.
As I remember Number 6 learned about Jammers from an eccentric artist Number 18 in ‘It’s Your Funeral.’ However it might pay to examine the article on the left first. 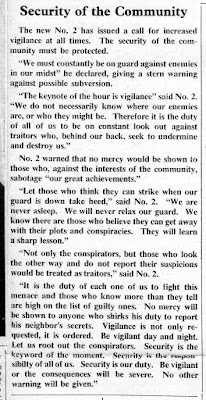 Number 2 called for an increase in vigilance at all times. “We must constantly be on our guard against enemies in our midst,” although Number 2 doesn’t know where these enemies might be, or who they are. Well we know who one was, the late Number 12, who tried to save the Professor’s life! But on the whole, might not these enemies within, be Jammers? After all the actions taken by Number 6 were the acts of a Jammer, non-existent plots and schemes thought up simply to play on Number 2’s paranoia. 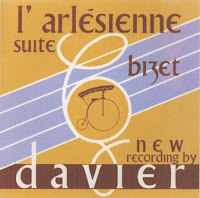 There was that episode with the 6 l’arlesiene LP recordings, all of which were exactly the same, with nothing hidden on them. But it did have the effect of Number 2 spending all that morning listening to all the six records! And that note to XO4 signed D6 concerning Number 2’s instability. There was no-one called XO4, but perhaps D6 equates to Drake-6?! Then Number 6 hid an envelope containing blank sheets of paper in the Stoneboat. Number 2 had two laboratory technicians’ time tied up in running a number of tests in order to discover what was written on them, words figures…but there was nothing! Later Number 6 went to a kiosk and asked the assistant to put a private advert in the personal column of the next issue of The Tally Ho. “Hay mas mal en el aldea que se sueña" which Number 6 describes as a personal joke between himself and a certain friend. After which he made a call to the hospital and the head of the psychiatrics department, whom he asked about the doctor’s report on Number 2, knowing full well that telephone calls are recorded. This resulted in Number 2 spending time with the head of the psychiatric department just to prove it was Number 6 who telephoned him. And then demanding to know why Number 6 had telephoned him. In this Number 6 turned the psychiatrist against Number 2. Well if the doctor hadn’t been preparing a report on Number 2’s mental health, he might well have been, after having to put up with Number 2’s false accusations! Then came the incident with the Leader of the Brass Band. Number 2 had him in for close interrogation, wanting to know what Number 6 had said to him. And all Number6 had asked was for the band to play the Farandole from the l’arlesiene suite! Number 6 then sent himself a birthday greeting. But it wasn’t his birthday, and Number 113, who was supposed to have sent it, was an old woman in a wheelchair who had died a month ago. The action of the Supervisor in reading out that message for Number 6 caused the Supervisor to lose his position, because he didn’t know it wasn’t Number 6’s birthday, nor did he know that Number 113 didn’t exist. Number 2 saw the Supervisor as being part of a conspiracy which he was determined to break!

Number 6’s next action was to purchase a Cuckoo clock from the General Store. He used the box to catch a pigeon, placed the Cuckoo clock at the door of the Green Dome, and used the pigeon to send a coded message. Number 2 thought the clock to be a bomb, and had it dismantled by bomb disposal only to find it was what it portended to be a Cuckoo clock, and in the opinion of the bomb disposal man its Number 2 who’s cuckoo! As for the coded message, it decoded into “Vital message tomorrow 06:00, by visual signal.” That visual signal was by Number 6 heliographing. So at 6 o’clock the next morning Number 2 had a number of cameras and observes watching Number 6 down on the beach. Number 6 began heliographing more code, Number 2 wanted it taken down. But who could Number 6 be heliographing? There was nothing on radar, no helicopter or aircraft. There was no ship at sea, and nothing was coming through on sonar, so no submarine either. Who was Number 6 heliographing? Well the answer is simple one, it was Number 2! And finally Number 6 put the poison in about Number 14, recorded on camera Number 2 finally turned on his loyal assistant, accusing him of being a traitor. Then Number 2 was all alone, all his friends and colleagues having deserted him. If those were not acts of jamming, I don’t know what they were. So how are we to account for these acts of jamming by Number 6, when ‘Hammer Into Anvil’ precedes ‘It’s Your Funeral’ when Number 6 learns about jamming from Number 118? Well if we go by the film library order of 'the Prisoner' according to Tony Sloman- film librarian on the Prisoner , ‘It's your Funeral' appears before 'Hammer Into Anvil.' This then would make sense. Number 6 in having been armed with the knowledge of jamming by Number 118, would then use that knowledge against Number 2. So how was Number 6 able to get away with his acts of jamming? Well either Number 6 was not a known Jammer, and so Number 2 could not then simply ignore his actions. Or perhaps Number 2 had simply never heard of jamming in the first place!
With these enemies within their midst, which Number 2 feared so much in ‘Hammer Into Anvil,’ might they not be the list of malcontents mentioned by the interim Number 2 in ‘It’s Your Funeral,’ which as the two episodes stand would suggest that those unknown enemies had been discovered and placed on a list of malcontents. But while looking at it the other way, via the library order, it doesn’t make sense that they should have a list of malcontents, and suddenly they don’t know who the enemies are within their midst!  But certainly after the act of assassinating the retiring Number 2, a mass reprisal had been planned, to purge The Village of all malcontents, of which, according to the interim Number 2, Number 6 was top of that list. Public enemy Number 6! Is it possible that such a purge would include Number 6? It seems highly unlikely, and yet Number 6 caused nothing but trouble since his arrival in The Village. When not attempting to escape, then going about poking his nose in where it had no concern, and generally causing as much trouble and disruption as he could. Such is the troublemaker that he is.
Of course there could be another reason for a controlled purge of The Village, this to control the population, to make sure The Village doesn’t out-grow itself and become over populated, and turn into a town!