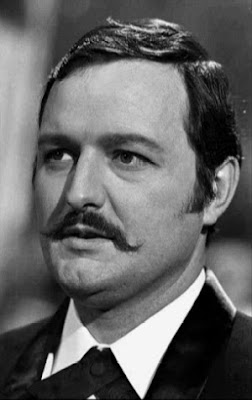 I wouldn’t trust this chap to sell me a second-hand car! There’s something about him, he’s a bit too oily for my liking. I know Number 14 suggested that Engadine could be brought to The Village, but no such suggestion was made about ‘A’. Perhaps he didn’t know too much, or too little to be taken to The Village. Although he did make World news a few years ago, defection wasn’t it? Yes he seems to be the sort to defect, but not on principle, but for money!
He’s called ‘A’ because we do not know his name, although might not he be Chambers? You will recall during the Prisoner’s briefing how he was due to meet with Chambers, hoping to change his mind before the “big boys” found out. That suggests to me that Chambers was going to defect. Ah, but he ended up being abducted to The Village, remember? Number 2 said of Chambers that he was a nice guy, and so talkative. So ‘A’ cannot be Chambers, unless “they” turned Chambers and sent him out into the World again, as an agent working for The Village. But that seems improbable, but not impossible. Although if ‘A’ is Chambers, perhaps it would have been better for him to have been ‘C?!’
‘A’ and ZM73 used to work on the same side, they were even friends once, but that all changed when ‘A’ went and defected. Now they do the same job but for different sides, and are no longer friends. It seems ZM73 has his morals, and despises people like ‘A.’