Information And Observations
Time travel may not have been in the Prisoner as queried by No.6, but Santa Clause was mentioned in the same episode.
No.6 eats and drinks well, just take an inventory of his refrigerator. aThere’s even a bottle of wine, with no "Village" wine label!
As much detail has gone into Six's refrigerator in the new series, as they did with No.6's in the original.
They may have gone into such detail with the contents of No.6's refrigerator, yet we only see into it very briefly, during the morning of ‘The Chimes of Big Ben.’
The reason for such detail in the Prisoner is because it was filmed as a film, and why they ran out of money towards the end!
The lease on the Prisoner's house had six months to run after his abduction to the Village. It was nice of them to renew the else for him. The delegates, and President in ‘Fall Out’ must have known Sir would choose to go, rather than to lead.
The fixtures, fitting, paintings, ornaments, television, and everything that was in No.6's cottage were either copies, reproductions, or identical tom the originals as those items seen in the Prisoner study in his home. Just stop and think for a moment, all the sourcing of all types of furniture, fixtures, and fittings that someone, somewhere, some department or other. which would have to do for every new arrival in the village!
The kiosk in ‘Hammer Into Anvil’ is seen to sell Village postcards. As a citizen of the village, who would you be likely to send a postcard to?
And if you were so inclined to send a fellow citizen a nice scenic postcard of the village by post. You might be quicker to round to, say 12 private, and deliver it yourself!
Extra "Blue Zone" in the post! what the hell is an extra "Blue Zone" in the post?
There are places in the village which are either marked on the map, or eluded to in the retiring No.2's speech, but which we never see. Like the , and the Library.
It appears to me that the graveyard on the beach is every bit a farce as Cobb's funeral!
The village enjoys two graveyards. One supposedly on the beach, and the other somewhere in the woods.
Cobb's faked suicide could have been an excellent piece of improvisation. Because I don't think Cobb was supposed to have encountered his old friend and colleague on that ward in the hospital. So Cobb having supposedly committed suicide, by jumping from a hospital window, is now dead to the Prisoner. 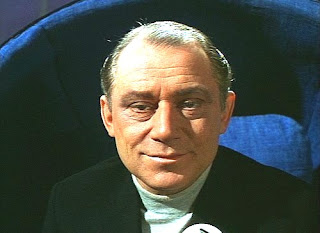 A rather nasty piece of work is this No.2. The only No.2 ever to raise his fist in anger, as he completely "loses the plot" as they say. Why he had to turn on the I cannot imagine. Because surely he must be aware of the ’s unquestioning loyalty, who I can imagine was actually glad to see the back of this particular No.2.
So much for the Hammer! Well anyone could have told him that Hammers wear out faster than Anvils! And this No.2 is the kind of man, who if he had been an American, would have seen conspiracies and Communists everywhere during the 1950’s. And I think that is reflected in the piece written in The Tally Ho at the time of ‘Hammer Into Anvil.’
So it would appear that No.2’s paranoia was alive and well long before No.6 used it as a tool against No.2 in the episode ‘Hammer Into Anvil.’ And who knows, because all you have to do is take No.12 of Administration in ‘The Genera’l as an example. After all, No.12 did carry out an act of sabotage in No.6’s cottage, in placing a piece of wire across the contacts of the light bulb. By which No.12 caused the electrical fault, thus giving him some 30 seconds to explain his plan to No.6. In exchanging one of the Professors lectures for his message heard played on the Professors tape recorder.
So, perhaps this No.2 had it correct. Pity he couldn’t even find it in himself to trust his assistant No.14.


It must have been something of a shock for No.2, certainly it must have come as a surprise at the very least. Because as No.2 looked up at the sky, he took off his spectacles to get a clearer view. To see the helicopter, which had just taken off with the retired No.2 on board, suddenly hover for a second, before making a turn...... turn and make its way back to the village!
Whether by remote control, as in the way the helicopter was flown by remote control when No.6 was attempting to escape in Arrival. Either by command order by the Supervisor in the control room to the helicopter pilot, or by word to the pilot of the retired No.2 himself to return to the village. But we shall never know. All you can do is pay your money, and take your choice!