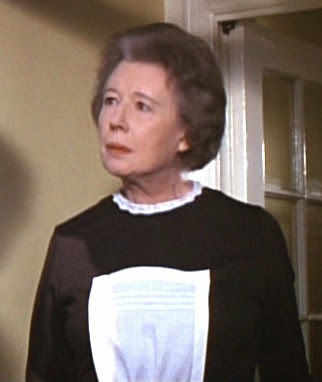 "Yes?"
"I'd like a few words."
"My mistress is not at home."
"No, I'm not here to see your mistress, I'd like a few words with you if that’s possible."
"Me, what for, who are you?"
"I'm a newspaper reporter."
"A newspaper reporter, what do you want with me?"
"How long have you and your mistress lived her?"
"I beg your pardon If you don't go away I'll call the police!"
"I'm quite sure your mistress wouldn't want you doing that."
"Why ever not, she has nothing to hide."
"No? How long have you worked for……..Mrs. Butterworth isn't it?"
"That’s none of your business, and it is no concern of yours what my mistresses name is. And I cannot conceive of any reason why my mistress would be of the least bit of interest to a person of the press. Now if you don’t mind, I'm expecting my mistress home any minute."
"Now that is interesting. Do you mind if I wait?"
At this point the door was firmly slammed in my face. So I waited, pacing the pavement outside, but I was not alone. I glimpsed a tramp standing on the corner, he seemed to waiting for something. then there came the roar of an engine. I turned to see a green, yellow nosed Lotus Seven approaching from the far end of Buckingham Place. The car came to a halt outside number 1, a woman got out and went up the steps of the house. I was going to follow, but paused, as the tramp dashed passed me, and up the steps of the house stopping the woman at the front door. I stood watching, he was asking the woman about the car. Eventually the woman invited the tramp in. A very kind and philanthropic woman is Mrs Butterworth. What I was going to tell Janet Portland I didn't know. That there was now a woman living in her fiances home. That her fiance was now living as a tramp! I did what all good newspaper men would do. I went to the pub around the corner, ordered a pint of beer and a whisky chaser, and thought about what my next move would be.

Your own reporter
Photograph from the Bureau of Visual records
Posted by David Stimpson at 08:47