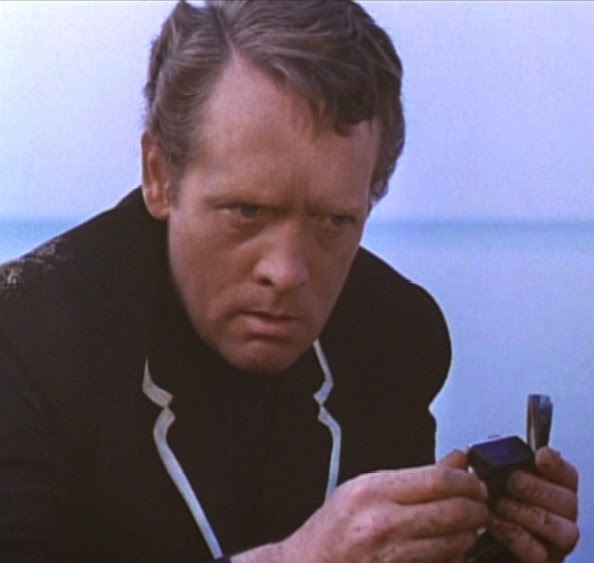 “Nowhere is there more beauty than here. Tonight when the moon rises the whole world will turn to silver. Do you understand, it is important that you understand. I have a message for you, you must listen. The appointment cannot be fulfilled. Other things must be done tonight. If our torment is to end, if liberty is to be restored, we must grasp the nettle even though it makes our hands bleed. Only through pain can tomorrow be assured.”
Number 2 from 'Hammer Into Anvil' was sure Number 6 was a plant, sent to The Village by their masters to spy on them. If he was right, it looks as though Number 6 has been hung out to dry by his superiors. On that second evening of ‘Dance of the Dead.’ Number 6 was found on the beach by Number 2. He was looking out to sea, looking for a sign from his world. A plane, a ship, a light. If Number 6 thought someone was coming from his world, he was to be disappointed, the radio message should have told him that much!
Of course Number 6 wasn’t the plant, that was Number 34 and he was dead. How Number 34 managed to smuggle a radio into The Village with him, is unknown. What’s more it is only assumed by Number 6 that the message was meant for someone in The Village, the dead man, seeing as he had taken the radio from a pocket in the dead man’s trousers. This assumption brought Number 6 down to the beach that evening, perhaps hoping that someone from his world was coming to The Village. It didn't matter who, anyone helping would have meant escape!