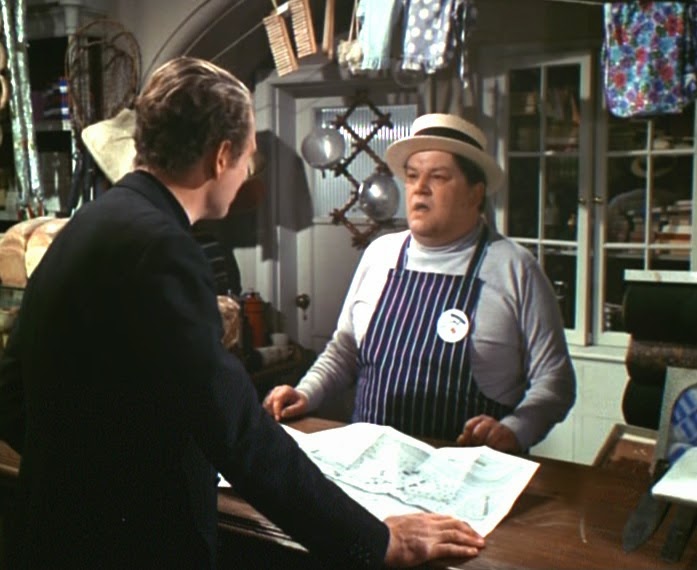 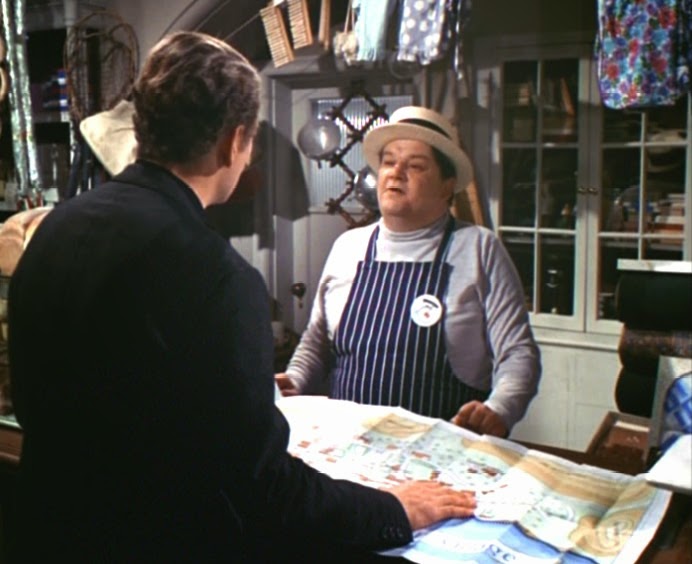 The Prisoner having woken up in what appears to be the study of his home, looks out of the window to find he’s no longer in London. He goes outside, climbs the Bell Tower {something he will later do on a daily basis}, goes to the Café, but doesn’t want breakfast. Attempts to make a telephone call, but that’s not possible because he doesn’t have a number. Then in having attempted to gain information from an electronic “Free Information” board, he takes a taxi ride. He wants to go to the nearest town, but the taxi service is only local. So the Oriental driver takes the Prisoner as far as she can, meaning as long as he turns up back where he started in the end, that’s why they’re called local.
Well the Prisoner didn’t exactly end up back where he started, he ended up outside the General stores. Having looked in through the window, the Prisoner goes into the Emporium. The shopkeeper is busy serving a customer, who helps herself to a pineapple. No, she’s not a shoplifter, it just saved the shopkeeper time that’s all.
The Prisoner approaches the counter and the shopkeeper bids his customer a good day, and asks what he can do for him. The Prisoner asks for a map of the area. “Colour or black and white?” It doesn’t matter to the Prisoner, he just wants a map. Not that the map tells him anything when he gets it. Yes the Map of Your Village does show everything, the mountains, the woods, various buildings. The thing is the Prisoner meant a larger map. But that’s only in colour, much more expensive. It’s a larger map alright, but of the same area, and that’s not what the Prisoner meant at all. He meant a map of a larger area. However there are only local maps, there is no demand for any others.
The thing about The Village Map is, it doesn’t actually tell the Prisoner anything. Nothing is defined, the mountains, the sea. The map tells the Prisoner where he is, but not where he is. It is possible to ask why the need for a map of The Village in the first place, when The Village is not that large in the second place. It is unlikely that anyone would get lost in The Village. After all, have you ever seen anyone actually use a map in The Village? Yes there was that time in ‘Free For All’ when Number 6 was looking for the Town Hall, but apart from that?