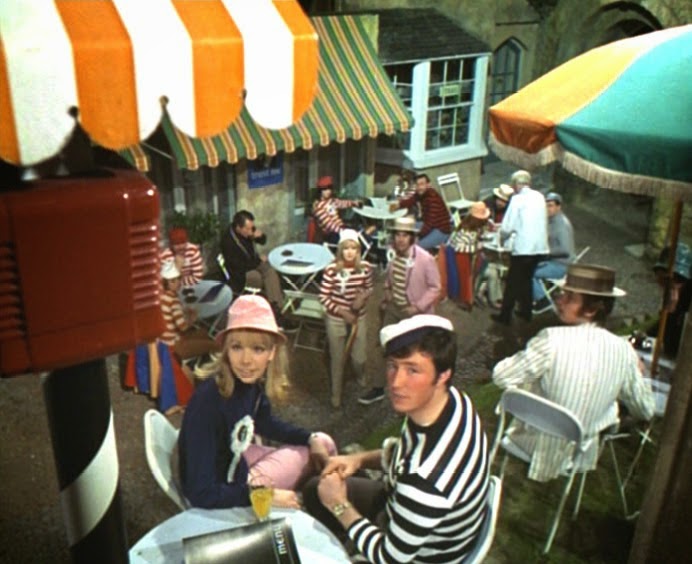 “Attention, ladies and gentlemen attention. This is an announcement from the General’s department. Will all students taking the three part history course please return to their dwellings immediately. The Professor will be lecturing in approximately thirty minutes. I will repeat that. This is a special announcement from the General’s department, repeat from the General. Will all students taking the three part history course please return to their dwellings immediately.”
It would seem that as Number 6 asks the waiter at the Café for another coffee, everyone has heard of the Professor and the General, everyone except Number 6! The thing with ‘The General’ is, that it gives the impression that Speedlearn has been installed in The Village overnight, which is ridiculous. Speedlearn had already been set up long before the outset of ‘The General,’ because students were already taking the three part history course! However either way, why does it appear that everyone knows about the Professor and the General except Number 6, where has he been? Perhaps he had been out of circulation, cut off from the rest of The Village, having been held incommunicado somewhere between ‘The Schizoid Man’ and ‘The General.’ Had he been away at sea for 25 days aboard his raft, that might account for it. But that wouldn’t happen until after ‘The General.’ Something else must have been happening to Number 6. Then having been released back into The Village he went for a cup of coffee at the Café, and appears to hear for the first time an announcement from the General’s department.
On the other hand, Number 6 did say that he’s not one of the Professor’s students, which means he doesn’t watch television. Because to take part in the Professor’s lectures the student has to be sat in front of a television set, so that the sublimator can project the miniaturised course at a speed thousands of times faster that the eye can record, in other words subliminally! It is imposed onto the cortex of the brain, and is with occasional boots, virtually indelible! So having recently learned of the Professor, the General, and the three part history course, Number 6 is now interested, and we all know what takes place thereafter.