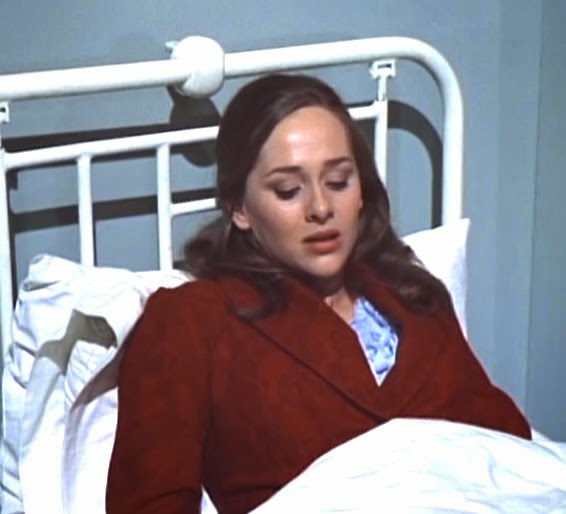 This is Number Seventy-Three. She was brought to The Village because they couldn't find her husband and thought that she would know where he is. According to Seventy-Three he's still over there, somewhere there. He had some work to finish, although he never specified what work that was. But it probably took place somewhere behind the Iron Curtain, either that or the Bamboo Curtain.
I couldn't help but feel sorry for Seventy-Three, because she was in The Village through no fault of her own. It must have been a very frightening experience for her, it’s no wonder she slashed her wrists in a suicide attempt. Mind you for the first time it appears that external agents working for The Village failed to find its target, 73’s husband. Mind you they couldn’t find Professor Seltzman either, not without the help of Number 6, because no-one knew where he was either! And yet on the other hand, they knew where the woman Mariah was. Number 2 had a photograph of the woman Mariah with 73’s husband. They knew the hotel, and that 73’s husband went there several times. So really all The Village’s agents had to do, was maintain surveillance, and pick 73’s husband up the next time he went to the hotel. Unless someone else got to him first!
Seventy-Three took the tragic step of escaping her confinement by jumping out of a hospital window in her second suicide attempt. Well that's been done, or at least staged before, on the day after the Prisoner-Number 6s arrival in The Village. He believed it then, that Cobb was dead. But this time he actually goes and looks down at the ground, why? Perhaps to make sure! Later someone put flowers on Seventy-Three's grave. I can only imagine that the flowers were laid there by Number 6, after all he had set about avenging Seventy-three's death, by bringing about Number Two's downfall. And besides who else would there have been in The Village to care enough about 73 to lay flowers on her grave?
As for Number 2, he was no great loss to The Village. He was simply a professional sadist. And since his arrival in the Village, Number 2 had seen nothing but conspiracy, and unknown enemies within The Village, who were working against the community. There was the article in The Tally Ho regarding the security of the Community, and calling for an increase in vigilance by Number 2. A man who proved himself to be nothing more than a weak link in the chain of command waiting to be broken. If only he'd trusted in those working around him, his assistant Number 14 for example. What happened to this Number 2 after he's reported a breakdown in control? Perhaps he spent the rest of his days on the psychiatric ward of the hospital. Well  it couldn't be imagined that he was the kind of man who would fall on his sword!