It’s Not The Same! 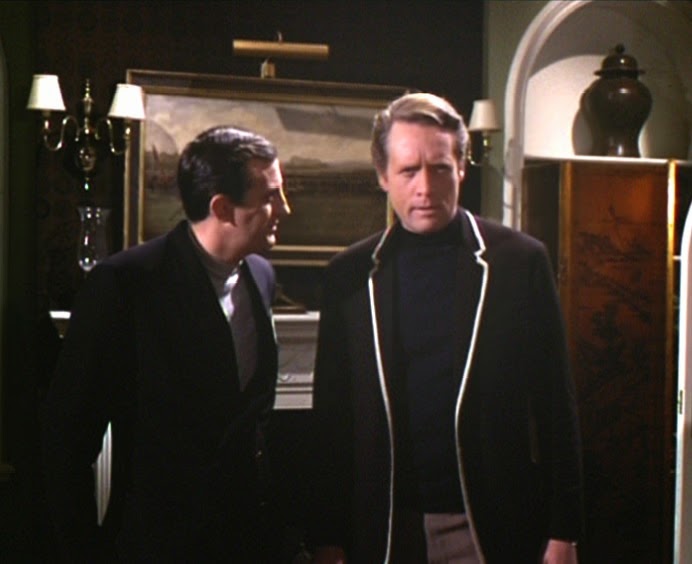 For ‘The Schizoid Man’ they changed things, little things, but enough for Number 6 to notice. The magazines were not Number 6’s, and the statuette should be gilt not silver. But it wasn’t only in ’The Schizoid Man’ that the interior of Number 6’s study was altered, if only ever so slightly.
In ’Many Happy Returns’ Mrs. Butterworth had made subtle changes to the Prisoner’s study at 1 Buckingham Place. The three framed Vanity prints had been removed, replaced by what appears to be a painting of a ballet dancer, and two sketches. The gold coloured draft screen has been removed, presumably put into storage, seeing as the screen is later put back for ‘Do Not Forsake Me Oh My Darling.’ The glass carboy with its plants which sat on the coffee table was also removed, replaced by a small vase, or posy holder together with flowers. There are two additions to the study, two framed photographs, one taken on Mrs. Butterworth’s wedding day with her husband Arthur. And one of Arthur in his Naval uniform set on the mantelpiece.
On the bureau there are a number of pieces of matching “deskanalia,” covered in leather, a blotter, stationary holder, a small box, and a pen holder. However by the time of ‘Do Not Forsake Me Oh My Darling,’ these items have been removed, and replaced by a simple “Things To Do Today” and Memo pad. There is also an addition, that of the framed photograph of Janet Portland. There is also the addition of a wall mirror just outside the study door in the hallway. On the far wall of the study where three Vanity Prints once hung, they are replaced by two sketches and a painting of a ballet dancer. Although the gold coloured draft screen had been replaced. And when Mrs. Butterworth moved out of No.1 Buckingham Place, the Vanity prints were not replaced, instead three small scenic paintings were hung in their place!  All this makes me wonder, whether or not the wall safe hidden behind the television, which the Prisoner removes money from in ‘Do Not Forsake Me Oh My Darling,’ is replicated in the study of 6 Private in The Village?!