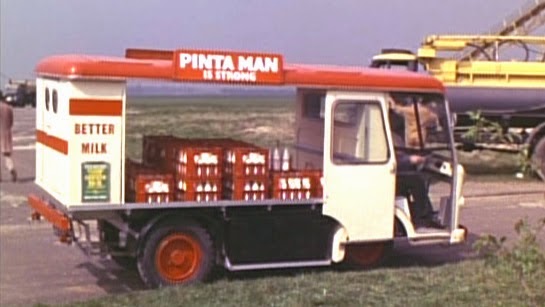 Such is the logo upon the milkman's milk float seen at the aerodrome in the episode ‘Many Happy Returns.’ The question has been asked, what is the theory behind the milkman and the episode itself? Obviously the milkman is an agent working for The Village beyond its confines. Dispatched to bring the Prisoner back to a happy return. Whether or not he attacks the RAF Group Captain rendering him unconscious, or whether he is helped by the Group Captain into his flying suit is unknown. But either way, it doesn’t take the milkman very long. As for the plot behind the episode, it is simply to show that no matter what the Prisoner does, wherever the Prisoner goes, he is always within the grasp of The Village and its agents. Hence the title of the episode ‘Many Happy Returns,’ which has absolutely nothing to do with the fact that it’s the Prisoner’s birthday. And afterwards, the Gloster Meteor, in all probability the aircraft was either ditched in the sea, and the pilot picked up by the crew of M.S.Polotska. It certainly couldn’t be flown back to RAF Gibraltar, otherwise questions would be asked about the non presence of the navigator!