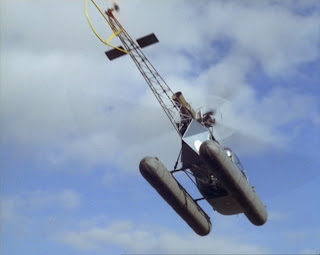 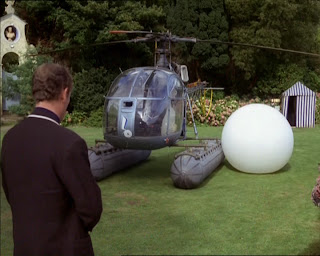 The attempted escape of Number 6 in 'Arrival.' I enjoy the aerial scenes of the Village, which can also be enjoyed in the aerial tour of the Village earlier in the episode.
It's all very well for Number 6 to get passed the Village Guardian using an Electro Pass, to start the helicopter's engine, to see the helicopter take to the air, and all the while Number 6 looks to be in complete control of the Alouette helicopter. The only thing spoiling the scene, the rotor baldes which are not turning in shots filmed through the front of the canopy. Which means both the helicopter, and Number 6 are still on the ground!

I'll be seeing you
Posted by David Stimpson at 08:52