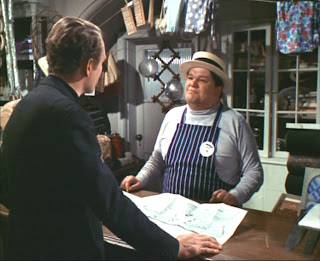 When in 'Arrival' the Prisoner having failed to get a taxi to take him to the nearest town, but only to arrive back where he started, goes to the General Store to buy a map of the area.
Number 19 or is it Number 56 because his numbered badge keeps changing in the scene, does his best to help the customer. First by producing a colour map, much more expensive, than a black and white map. But both show the same thing, only with the colour map which is larger. A larger map, not a bigger area as required by the Prisoner. But there is no call for such maps!
Another favourite scene comes in 'Hammer Into Anvil,' when Number 6 goes to buy a small notebook. However by this time Number 19 has been replaced by Number 12, a weasely type of character. 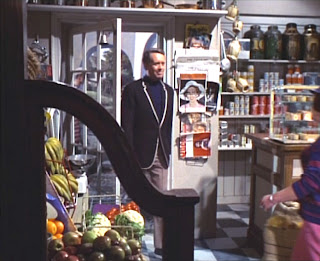 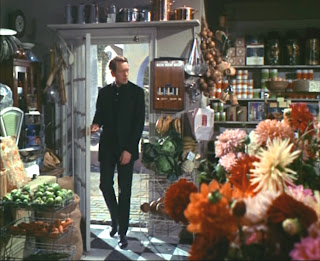 Also by this time, the cigarette machine seen on the wall in 'Arrival,' has been removed and replaced by a newspaper and magazine rack! The magazine at the top of the rack is 'Village Weekly.' Also sold is 'Village Journal.' And one magazine has the picture of actor James Darren of the 1960's television 'Time Tunnel.' The bottom magazine appears to be called 'Queen.'
BCNU
Posted by David Stimpson at 08:44