Free For All
Profile 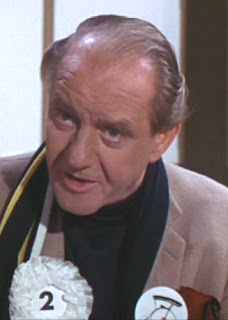 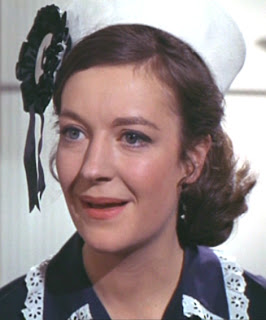 A woman working in the village as a maid, who appears not to speak a word of English but a language which is completely incomprehensible! But not apparently to Number 2, who understands her only too well.
She is not altogether unattractive, and is quite delightfully charming.
Dressed in a dark blue dress, white apron and white sailor’s hat, later wears the usual “old school scarf”.
Female
Height …..  5feet 3 inches {approx}
Weight….. 120lbs [approx]
Age……… late twenties {approx} 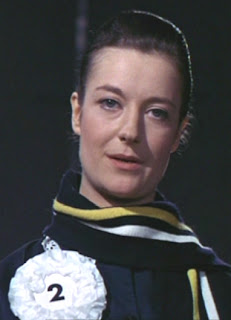 Hair……… black.
Nationality…. . Unknown perhaps Eastern European or Speaks an unknown
Language and yet perfect English
Worked under the pretext of being a maid
Chief Administrator
Chairman of the village
Right handed.
Village attire, although the election period in the uniform of a maid, black dress, white lace apron {at times},white sailors hat and flat shoes.
The fist woman to be elected to the position of Number 2 Chairwoman of the village, but then she was not exactly elected, certainly not by the citizens, rather being appointed! This can only mean that she was appointed by someone, but who and from where?
According to Number 2, she used to work in records and has a photographic memory. Although she maybe a mere Number 58, she turns out in the end to be a master player of the game.
She is kind, affable and quite charming. She does her best to help number 6 as best she can, even to the extent of finding him an illicit drink!
At the end she and Number 6 are like children playing in Number 2’s office, pressing buttons on the control panel, excitedly as children would, to find out which button did what.
This mere Number 58 is very well informed, knowing about that cave as she did, and where number 6 could get an illicit drink of alcohol.
Never once does she drop her façade, pretending to be nothing other tan a maid and his personal driver during the election period. Not until Number 58 drops her façade, revealing her true self, does she have any impact upon Number 6. But when she does, it is quite utterly devastating!
In her guise of a maid she is quite likable and remember cannot speak a word of English, or so it appears. Speaking some indeterminate language, but quite possible an Eastern European language. But then when alone in the green dome her character begins to change. And it soon becomes clear that Number 58 is in fact the new Number 2, and is instantly dislikeable! Not only that but she can now speak perfect English, but without any kind of foreign accent!
It has all been an act, just part of the bigger game. The new Number 2 has been in the village all along, playing her role. ‘Deceptive’ is the word which sums her up.
Her manner is stern, cruel and down right aggressive. It is a somewhat chilling transformation.  As the new number 2 she asks number 6 if he will never learn and is he ready to talk yet?
This new Number 2 has ways and means, but does not wish to damage him permanently. Her stern and cruel manner, suggests that she might go further than any of her predecessors in order to obtain that which they desire.
As Number 58, she was accused by Number 6 of spying upon him. As it turned out number 6 was perfectly correct. Not only was she spying upon him, but was also in the perfect position to keep a close eye upon him.
The new Number 2 appears to be cold with no love in her heart, perhaps not even for herself. And has an instant dislike of Number 6.
And there again we see the new Number 2 wearing the old school scarf, left in the foyer by the departing number 2 along with the furled umbrella shooting stick. She has returned to the foyer in order to be wearing the scarf as Number 6 is dragged before her. Such an action can only help to enforce the importance of the old school scarf, as part of Number 2’s uniform, because it has been passed on to her by the departing number 2, together with the fact that she returned to the foyer to get it.
There is a severe look upon this woman’s face and a deep foreboding in the sound of her voice as she tells Number 6 ‘will you never learn, this is only the beginning. We have many ways and means, but we don’t wish to damage you permanently. Are you ready to talk?’
It can only be left to one’s imagination as to what this woman, this new number 2 had in mind to put Number 6 through next. One thing is for certain, it wouldn’t be pleasant…… for the Prisoner!
And then there is that final remark at the end which she made to the departing Number 2, ‘give my regards to the homeland’.
Had number 2 used the word ‘fatherland’, then that would have meant . Had she referred to the ‘motherland’ then we would be looking at or the soviet union, as was the suggestion in ‘The Chimes of Big Ben’.
However the use of the word ‘homeland’ would suggest .
And if Number 2 is sending her regards to the ‘homeland’, then this strongly suggests that the village is not on home soil, but in some other territory, and not in the . The only question is where? 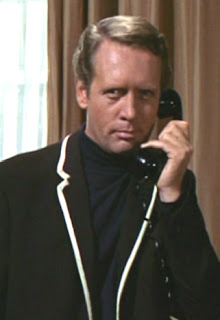 The prisoner is as defiant as ever, since his arrival in the village.
But is there something special about him? Well there must be in order for him to have his breakfast brought to him by the maid-Number 58. But then as Number 2 himself is present, this could have been a special treat for number 6. Inviting himself to breakfast, and brining it with him!
We also learn that Number 6 gave up sugar four years and three months ago, on medical advice. It is possible that Number 6 has a mild form of diabetes.
He is afraid of nothing, he shouts in defiance having been accused of being afraid of death, being afraid of himself by the Labour Exchange manager.
But the prisoner is afraid of nothing and certainly not of himself!
Number 6 is given the opportunity to run for electoral office, well he might as well while he is waiting, waiting for what? A chance to escape and could this be such a chance?
For a short while number 6 was the new Number 2, even if only in name only.
He is told by Number 2 that the citizens do not appreciate free elections and that ‘he’ is just the sort of candidate they need. And Number 6 falls for it, hook, line and sinker!
But wants to know what physically happens if he wins?
He is told by Number 2 that number 1 will no longer be a mystery to him, if he sees what he means.
But then Number 6 sees this as a chance to gain the position of Number 2 and there by controlling a mass exodus of the village.
Right from the beginning he throws himself into the election, giving his first speech to the electorate from the balcony of the Gloriette.
“I am not a number, I am a person” is the opening of his speech to the electorate, going on to tell the citizens that “at sometime, in some place all of them held positions of a secret nature and had knowledge that was valuable to an enemy. Like himself they are here to have that knowledge protected or extracted.”
Number 6 puts the citizens into two categories, ‘those who have accepted the situation of their imprisonment, who will die here like rotten cabbages’, and ‘those who have gone over to the side of our keepers’.
That opening line from his maiden speech “I am not a number I am a person,” shows Number 6’s defiance. As does the early morning telephone call.
‘You are Number 6?’ asks the operator.
“That is the number of this place!” returns the prisoner defiantly.
Whoever during the election period Number 6 has no choice, not only to respond to his number, but also to accept it, if he is to stand any chance of actually being elected.
At one point soon after his opening speech Number 6 is interviewed by a reporter for ‘The Tally Ho’ newspaper. However when asked by the reporter {who is excited by the prospect of this new candidate, not having one of his calibre for years!} how he is going to handle his campaign? Number 6 replies "No comment." However the reporter has pencil and note pad ready and writes his own answers to his own questions.
And when Number 6 does give an answer to the reporter’s question ‘how do you feel about life and death?’
“Mind your own business!”
The reporter writes down “No comment!”
Literally moments after the interview with the reporter, a Tally Ho vendor is selling issues of the latest electoral edition from a strange printing press.
When number 6 is handed a copy of the latest edition {by an identical twin of the photographer 113b, and dressed identically} he sees that the article headed ‘No.6 Speaks His Mind’, has already been written. The words of the press, not his!

No. 6 Speaks His Mind  by our own reporter

The security of the community will be his
Primary aim, said No. 6 in an exclusive interview.
The forthright candidate for the post of No. 2 is
determined that the citizens be safeguarded against
all threats to their welfare.
“I have every confidence in my chances,” No. 6
told our reporter: “I admire No. 2 as a man and I
pay tribute to his achievements. But the time has
come for change”.
No. 6 insisted that it would be a hard fight, “but
a clean one”.
We must put the well being of the community
above everything else, he declared.
I did not seek this opportunity to run for our
highest office,” said No. 6, “but I accept the call
when it came, because it is my duty as a citizen”.
No. 6 said that his platform would be “an
opportunity for everyone and freedom for all.
I shall fight for the rights of all of us, and I shall not
shirk the decisions that have to be taken”.
In a true democracy like our community, every
Individual has a special responsibility to express his
mind by voting for the right candidate.
“Cards on the table is my motto”, he told our
reporter. “Everyone has a choice in this matter,
and I know they will vote for the candidate who
gives it to them straight from the shoulder.
“To have the vote is a great democratic asset
which must not be abused”, No. 6 reminded an
enthusiastic election meeting. “You must feel free
to make your cross in the right place”.
No. 6 said he entered the contest with enthusiasm
for a system which gave the ordinary citizen the
right to run for the highest office.

Free For All continued next time