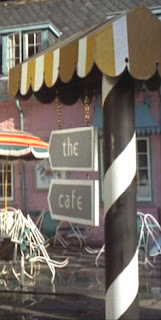 There are a couple of things about the Village which are rarely discussed, and they are these. Firstly all the signposts in the Village are in English. You would think that if the Village was somewhere behind the Iron Curtain, in Lithuania, the signs would be in lithuainian, possibly Russian. Secondly despite the Village being an International, a cosmopolitan community, the spoken language in the Village is English, apart from a couple of languages we hear spoken by the Number 19-the Shopkeeper in 'Arrival.' And by Number's 2 and 58 in 'Free For All.'
Today English has become an International language, spoken in countries all around the world. But that was not the case in the 1960's. Imagine how a non-English speaking person might feel, having been brought to the Village, unable to speak English, unable to make himself or herself understood. Number 2 would need an interpreter!
I know that in Colony Three of 'Danger Man' the language is English. But Colony Three is supposed to be a typical Englsih town called Hamden, where agents are trained to be Englsih, so that Englsih is their first language. But people are brougtht to the Village for other reasons. It just seems peculiar that everyone has Englsih as their first language!

I'll be seeing you
Posted by David Stimpson at 09:03