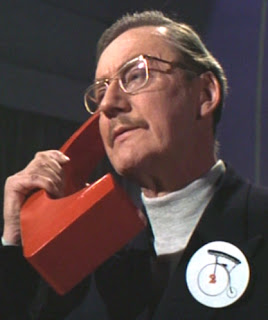 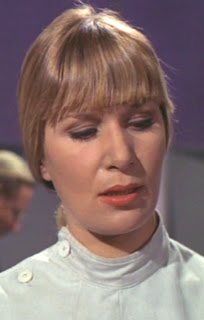 Female
Age…. Early thirties {approx}
Height. 5feet 8 inches {approx}
Weight.. 140 {approx}
Hair…. Blonde
Eyes… Blue
Nationality…  English speaking
Village attire,  black and orange stripped jersey, fawn slacks, deck shoes and a colourful stripped cape. A white surgeons gown when working on her patient.
Wears a wrist watch with a brown leather strap on her left wrist
Last week number 14 was an old lady in a wheelchair, she is new here and one of ‘them’!
The Doctor has a love of flowers, she is seen buying flowers from the flower stall. But having no one to buy her flowers, the Doctor buys them for herself.
She has developed a new drug which injected into a subject allows access into the subjects dreams. To be able to manipulate them even, to feed him with pictures and a step further to feed him with words!
Number 14 is a very cleaver doctor, verging perhaps on the side of genius. But however cleaver she maybe, she is like the rest of us, not averse to making the occasional mistake. “We all have to make mistakes, sometimes we have to’.
That is a very curious statement to make indeed, and what is to be made of it? Why should anyone ‘have to make a mistake? Perhaps the good doctor makes mistakes in order to protect her patients against Number 2. After all she has to do her best to control the use of the drug on number 6, forcing Number 2 to realise that it is a very dangerous drug and the subject must rest 24 hours between doses.
Her first mistake happened in the laboratory, not the fact while lying upon the operating table, Number 6 opened his eyes and saw the doctor. Her face appearing on the wall screen, but her failure to report the incident to Number 2, who had not seen the incident his turned towards the screen at the time.
Had the doctor reported the said incident, then Number 2 could have dealt with it there and then, and so by doing the outcome of the experiment would have been different. Number 2 may very well have succeeded.
At the Old Peoples Home, Number 6 sits down at her table “how does one talk to someone that one has met in a dream?” This is an indication that the doctor has inadvertently given number 6 a clue as to what maybe occurring. Then she uses the curious phrase “We all make mistakes, sometimes we have to.”
And then we come to the doctors second mistake, it was during the time that she was putting words into the mouth of ‘B’. Number 14 used that curious phrase of hers We all make mistakes, sometimes we have to.”
The doctor’s third and final mistake was on her way to the laboratory, when she allowed herself to be followed. Which in itself is curious, because what were the observers doing at this time? Should they not have picked this up, one would have thought so, with so much surveillance!
Considering the fact of surveillance and the observers, perhaps Number 14 felt safe in the knowledge that anyone who deemed to follow her would be picked up by the observers!
But the observers didn’t pick up on Number 6. Had they done so, and reported this to their supervisor, he would then have reported to Number 2 who would then have been able to act upon the information and situation. Nor did the good doctor pick up on the third and final syringe, its contents now diluted. Would not the colour of the liquid now diluted, be paler than before?
There is a case here for gross incompetence against the doctor.
“He knew all the time. He was playing with you” comments the doctor.
Hardly surprising was it? And whose fault was that?
However her superior is ultimately answerable for this failure, however the blame can be firmly placed at the feet of the doctor Number 14. But a word with the supervisor and the observers would not go amiss!
Her superior must ultimately answer for this failure, however the blame can be firmly laid at the feet of the doctor. She did, if inadvertently, give Number 6 a valuable clue as to what was taking place against him.
However it is the ethics of this doctor which have to be called into question. Yes she was under the direct command of her superior the Number 2. And yes she did show great  concern for the patient. But it was her who developed this new wonder drug” and therefore must have known the use it would be put to.
This doctor was most probably recruited from a medical research facility, what’s more she seemed almost pleased about Number 6 succeeding. 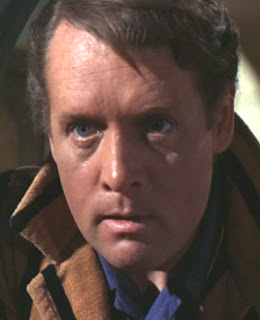 This is the first time that drugs are used in order to try to extract the information of the prisoner’s resignation secret, since his arrival in the village.
The prisoner wake, he is still tired, his body aches from a disturbed sleep.
We see one of Number 6’s peculiar mannerisms, the twitching fingers of his left hand, perhaps the sign of a nervous state of mind.
The first sign that something is wrong, is when Number 6 is at the door of his cottage, He sees the face of Number 14, and seems to recognise her. Then he discovers the small, bruised puncture mark on his right wrist.
Outside his cottage Number 6 sees a woman dressed in a colourful stripped cape, with long blonde hair. He recognises her, the penny farthing badge she wears denotes the Number 14. Later when Number 6 meets up with Number 14, he responds by giving her his number. This is something which number 6 does very rarely.
He then goes to pay number 2 a visit, the one person in the village who will know what’s going on and most likely the man behind it!
Number 6 shows Number 2 the bruised puncture mark on his right wrist, Number 2 feigns not to notice it. Number 6 tells him anyone who knows nothing about it, would ask where I got it! Number 2’s only comment is that he must have got it in his sleep!
Each and every night as Number 6 prepares to retire for the night, the maid makes Number 6 a cup of hot chocolate. And each time the chocolate is drugged!
But on this third occasion number 6 does not drink the cup of hot chocolate. Instead he pours the chocolate down the sink! Then takes a glass and fills it with clear liquid from the tap. After starring into the clear water, he takes a draught, and second later his collapses in a heap on the floor in the bedroom!
Was Number 6 feigning this, or was the water in the glass really drugged? If Number 6 was really feigning, the doctor should have known.
In any case the diluted drug will have less of an effect upon him and in so being was easier for Number 6 to turn it to his advantage. In his dreams of course!
Once again we see the ingenuity of Number 6 getting him into places where he should not be, the laboratory. But Number 6 also gets lucky, he is not seen following the doctor through he village and up into the woods to the laboratory. Nor is he seen in the laboratory itself, completely unobserved! Possibly as the laboratory is hidden there is no need for surveillance.
A loner, but can be sociable when the occasion demands
He can also be the loneliest person at a party.
He is very single minded.
He is not conventional.
And his repeating over and over in his dream the act of his resignation is most certainly an anguish pattern.
In the end it is a victory over his captors, but one that should not have been. However cleaver and ingenious number 6 is, however strong and determined he is, Number 6 also needs a degree of luck. And here he sees to get it all in one go!
In the end it is seen that the prisoner was not selling out, he was and is as loyal as ever he was. He really was going on holiday, either to Italy, Greece, just two of his possible destinations indicated by the brochures in that white envelope he carried.
How easily he turned the tables on Number 2, how easily he sucked him in.
The prisoner was heard to say that he never has like secrets. Is that a possible clue as to why he resigned? The fact that secrets were being held from others.
One of Number 6’s mannerisms is sniffing strongly as he adjusts his bow tie. Another that he cannot relax, he is always walking and must keep himself active.
And the way he delicately holds the glass of water and smacks his lips together.
Here we meet some of Number 6’s old friends and contacts in the outside world.
The first being…………… 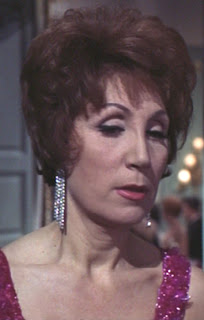 ,
Hair…. Auban/Brown
Height….. 5 feet 2 inches {approx}
Weight….  114lbs {approx}
Nationality… French
A very rich French woman, middle aged, but still quite attractive. But divorced several times over! Perhaps that is how she acquired her wealth!
Holds celebrated parties, to which all the celebrities attend, the rich and famous together with the notorious!
A tactful lady, she had kept both ‘B’ and the prisoner apart, until this evening. The reason for this is not known.
She speaks excellent English but of course with a French accent.
She dresses elegantly in a flowing red and silver gown, and has a real taste for the good things in life.
She lives in a Chateau somewhere on the outskirts of .
She does not like ‘A’ and isn’t too bothered that he left her party. But thinks it very rude not to say goodbye, just to leave the way he did.
How the prisoner has become associated with is not known, but they are firm friends, judging by how they greet one another.
She can be a jealous of other women. She tells the Prisoner to be rude to her, his old friend of his.

We continue with 'A B abd C' next time

BCNU
Posted by David Stimpson at 07:45