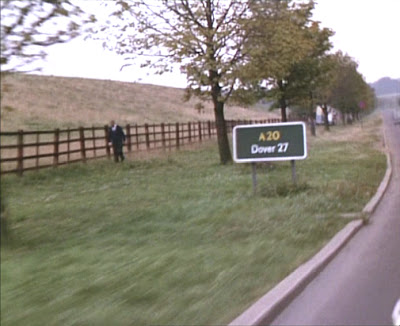 It was once asked by one aficianado of 'the Prisoner,' what's that chap doing, he seems to vanish behind the road sign?! Well of course he dosen't, he's a member of the general public, completely unaware of the filming of the Lotus Seven and Lotus Cortina which passes on the road during 'Do Not Forsake Me Oh My Darling.' He only appears to disapear behind the road sign because of the moving camera.
There is no mystery about this man, a member of the general public who has parked his car in the lay-by up ahead, where there is a refeshment van. And he's just taking a short stroll to stretch his legs before continuing his journey.

BCNU
Posted by David Stimpson at 08:21