Continuing the profiling of Village citizens with; 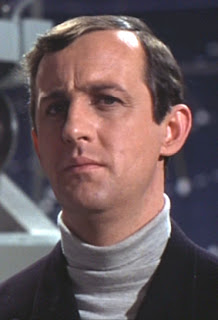 Number 2
This number 2 appears keen to be the one to break Number 6.
He is self confident, perhaps too confident at times, calculating, precise and egotistical. Never is he put under any real pressure. Only when number 6 telephones him to give his password and to inform him that number 6 is dead, does this Number 2 panic. But even then he is quick to sense that something is not right. And therefore soon gains the upper hand once more, thwarting Number 6’s escape attempt.
Male
Height…..  6 feet {approx}
Weight…. 160 lbs {approx}
Age…….. late thirties {approx}
Hair…….. black
Nationality.. English speaking
Chief Administrator
Chairman of the village
Right handed.
He wears a signet ring on the little finger of his left hand.
Well spoken and charming man. However he would not make a good field agent, and so here he is stuck in admin! Yes but what administration, that simply of the village, or some other administration of some other department somewhere else?
Village attire, smartly dressed in plain dark double breasted blazer, grey polo neck jersey grey flannels and deck shoes. Occasionally wears the old school scarf and carries about with him the furled umbrella shooting stick, as have many of his kind before him.
A plan has been devised to make Number 6 crack, however this is not Number 2’s plan, but apparently that of the general’s.
So perhaps number 2’s confidence, stems from the fact that any such failure would not be down entirely to him. So perhaps not full disgrace, should he fail.
He is quick to see the unique relationship between number 6 and the girl Alison.
But this Number 2 is a wily fox, and when Curtis-Number 12 pays him a call, after the supposed death of Number 6, impersonated by Number 6. He does have a niggling doubt, even though Number 6 had given the correct password.
He is a personal friend and close colleague of Curtis, or, which makes the possibility of Curtis being a clone of Number 6.
Number 2 certainly knows a good deal about Curtis’s private life, he knew that he would make a top field man, while he is stuck in admin.
He tells Curtis-Number 6 how he took longer to grow a moustache that time in . He told him how Susan hated him without his moustache, she told him {Number 2} that she wouldn’t kiss you again until you grew it again. And of course   Number 2 knew that Susan died a year ago.
The need for two passwords ‘Gemini’ and ‘Schizoid Man’, was if things did become so confused, that even number 2 could not tell them apart. The passwords were to be his safety net so to speak. After all Number 2 is not infallible. If he wasn’t he would not have missed the bruised finger nail of Number 6’s left hand. However both the doctors and the observers missed this. And during the taxi ride to the waiting helicopter, Number 2 begins to have real doubts as to who the man sitting beside him is. He has never seen Curtis so ‘strung up’ before. He tells him that he ‘has changed’, that they have been in scraps together before, but they’ve never fallen out over them before.
He goes to talk to the helicopter pilot, laying a plan to find out if Curtis really was Curtis. Perhaps telling him, if Number 6 answers in a certain way to 2 his sending Susan his regards.2 Then he was to bring his passenger to the Village.
There is also a nasty side to this Number 2, not sadistic, but he does take pleasure from seeing Number 6 in such a confused state of mind.
“He’s cracking Number 12, it wont be long now” Number 2 tells Number 12.
How ever he also put Number 12 through it, when in the Green Dome, Number 2 interrogates him.
He spares Number 12 nothing, under the pretext that the interrogation must be as real as his impersonation of number 6. And when the pair of 6’s arrive at the Green Dome, one is manhandled into his office. While number 2 himself, greets Number 6! This is probably because number 2 does not want me {the butler} to see the two Number 6’s together.
Then a final turn of the screw. Number 2 could have stopped Number 6, when Number 2 asked him “Not to forget to give Susan his regards.” Number 6 replied ‘I won’t.”
Number 2 already knew that Susan died a year ago, so the man he thought to be Curtis was in fact Number 6. But instead, he allowed Number 6 to think he had got away with his subterfuge.
The plan was a good one, take away Number 6’s sense of identity and he’ll crack. But why make it so abundantly simple to define which of them was Number 6? It should have been that both Number 6’s wore the same dark piped blazer. Not one wearing a cream one! That went to simplify things too much.
If any part of the blame, for the failure of the plan is to be laid at the feet of number 2. Then he did manage to redeem himself, by thwarting Number 6’s escape attempt. Had he not been able to discern between Curtis and Number 6, well the final situation would have been quite different. 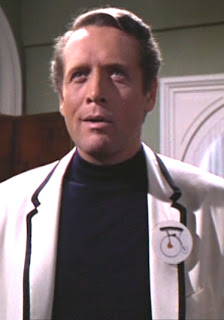 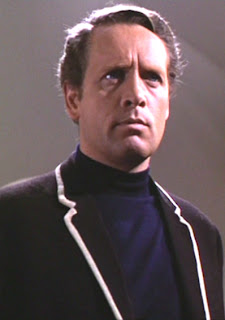 Free For All continued next time