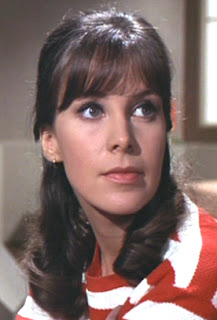 Alison - Number 24
Female
Height….5 feet 5 inches {approx}
Weight… 125 lbs {approx}
Hair……. Brown, done up in a pony tail.
Age……. Mid twenties {approx}
Nationality…. English speaking
Village attire, a red and white stripped jersey, with white slacks and at times a bright red cap and flat shoes.
A bright, keen young girl, who seems to want to enter every event of the village festival, indeed she seems very comfortable with life in the village.
She was grateful to Number 6 for allowing her to practise her mind reading act on him.
So what was it that brought Alison to seek Number 6’s help?’ This is one indication of something which happens in the village, but which we do not see.
And with whom was she to perform her mind reading act with at the Village Festival, Number 6 perhaps, or Curtis as it surely would have been.
She seems to have a genuine rapport with Number 6, indeed she is only the second woman we see have any sort of relationship with Number 6. However it is a different kind of relationship between herself and Number 6 to what it was between Nadia and number 6.
Alison is nervous of Number 6, you can see that when she asks him if she can take one more photograph, and if she can see him again tomorrow.
Alison is also very persistent.
So with Number 6 taken away at the time of the village Festival for his reconditioning, who did Alison carry out her mind reading on, it had to be Curtis in Number 6’s stead, because Curtis was supposed to be Number 6.
On the other hand It could so easily have been an act. Using an observer via a hidden camera to see the cards in number 6’s hand and relaying which card was in Number 6’s hand via a microphone hidden in Alison’s ear. This would lead to Number 6 thinking that Alison really was ‘gifted!’
However as we see, Alison appears to have a real interest in telepathy. There is a copy of a book called ‘The Mind Reader’.
However, to have a copy of such a book does not automatically mean that the girl has read it. After all I have a copy of Kafka’s ‘The trail’, but have yet to read it!
If not there was really no need to emphasise the mental link with Number 6, because her act, if that was what it was, could have been performed with anyone.
But if as seems likely that the rapport was a genuine one then it would have worked with Number 6 and no one else, hence the mental link.
Why she was brought to the village in the first place is unknown. It could be that she was born in the village.
She is only the second villager to be called by name, rather than by her number, and appears to have something of a relationship with Number 6, the first woman to get close to Number 6 since Nadia.
Rather than actually work for the village, she could easily have been persuaded to do what she did, the mental link being a genuine one. The fact that that link disappeared during the time in number 2’s office, was only due to Number 24 simply calling out the wrong card 4 out of 5 times. And her apparent rapport with Number 12, was simply down to a prearranged set of five cards between them after careful arrangement of the deck of cards. Also Alison could have called out any symbol she liked, after all Number 6 couldn’t see what card Curtis held up to his face.
What brought about her betrayal of number 6 is not known. Probably by pressure brought to bear by Number 2, it is quite obvious that Alison is yet another pawn to be used in the game against Number 6.
However in the end Number 24 is ashamed of what she did to number 6, it was a betrayal and she wants him to know that given a second chance, she wouldn’t do it again.
By the way in which Alison tried to put off Number 6 by telling him that she ‘was just going to wash her hair’, would strongly suggest that she knew what was about to take place and didn’t really want to go through with it.
Because due to her rapport with Number 6 she realises that it is in fact Number 6 in the cream blazer that visited her at her cottage and not number 12.
No part of Number 2’s failure to crack Number 6 can be laid at the feet of Number 24. She did what was asked of her, she played her part.
But whatever you may think of this woman, if it was not for her persistence in taking number 6’s photograph in practicing for the photographic section of the village festival, then the subsequent accident with the soda siphon would never have occurred and then the next photograph taken would not have had the resulting bruised finger nail upon it, and Number 6 may not have grained his true identity.
She could so easily at that point, called Number 2 and betrayed Number 6 for a second time. Perhaps she felt that she should make amends in some way. Anyway it appears that this is one woman that in the end, Number 6 could trust. 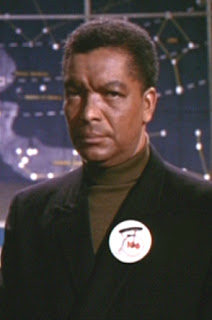 Supervisor – Number 106
Male
Height …. 5 feet eight inches {approx}
Weight…. 155 lbs {approx}
Age…….. early forties {approx}
Hair…….. black in afro style
Nationality… Haitian
Village attire, black plain blazer, olive green polo neck jersey grey trousers and deck shoes.
Speaks excellent English, and was most probably educated in .
An educated man, but not without knowledge or reference to ’Voodoo’, ‘In , they’d say , he’s stolen his soul’ he tells number 2.
This man has not been seen before, it is quite possible that he is some form of interim supervisor, while the other is on leave. Or perhaps due to the shift pattern worked in the control room, the supervisor with whom we are familiar is on night time supervisory duty.
A competent and efficient man, in charge of the control room, but a man who can enjoy a smirk with number 2 at the expense of number 6. No doubt in this supervisor has seen much worse! 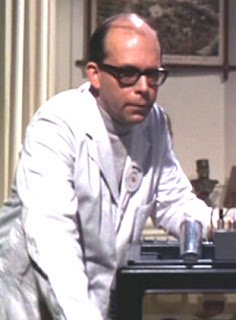 The Doctor – Number 118
Male
Height…. 5feet 8inches {approx}
Weight…. 150 lbs {approx}
Age…….. Late thirties {approx}
Hair…….. Black and thinning
Wears thick black rimmed glasses
Nationality…. English speaking
Village attire, white coat, grey polo neck jersey, grey trousers and white shoes.
He is blamed by number 2 for the lack of a mole on number 12’s left wrist. This of course not his fault, as there shouldn’t have been one in the first place. But he acts as though accepting the harsh words of number 2, as if he were guilty of the fact. For the benefit of number 12 that is!
His ethics as a doctor/ lab technician are questionable.

The Doctor –Number 110
Male
Height…. 5feet 11 inches {approx}
Weight…. 175 lbs {approx}
Age……. 35 {approx}
Hair……. Dark brown
Nationality…. unknown
Village attire, white smock and grey polo neck jersey, grey trousers and white shoes, this being the uniform/costume of the male medical staff at the hospital.
Like his colleague, there is the question of his ethics. 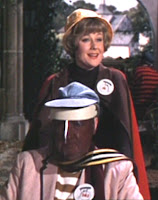 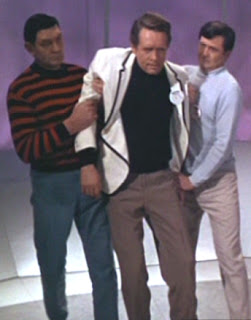 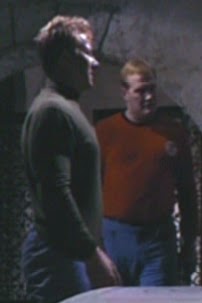 Man in Wheelchair– Number ?
Male
Height…. Unknown
Weight….. Heavy
Hair……... Unknown
Age……… Late fifties – early sixties {approx}
Nationality…. Unknown
Whatever is wrong with this patient, it causes him to have to wear a red tinted face visor, which is seen to be worn by other citizens of this community.
He is also wearing the stripped scarf normally only worn by Number 2, this indicates that it is possible that this patient is a former Number 2. 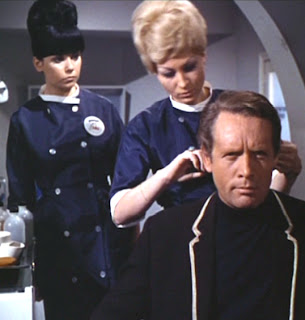 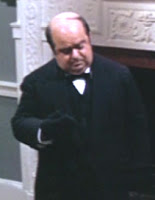 The Butler
There are things which my master ‘the number 2’ does not wish me to see. One being the double’s of number 6. I was not called upon to be in attendance when the pair of 6’s arrived at the Green Dome. However I did greet number 6 earlier, he sported a moustache and had black hair. I thought he was number 6, he certainly looked like number 6, wearing his dark blazer with white piping.
Earlier I had prepared breakfast, my master instructed me to include ‘Flapjacks’ {Pancakes}, and to have four already prepared and put out on a plate separately. He was, he informed me, expecting a guest for breakfast whose favourite dish is flapjacks!
Amongst my many and varied duties, I am sometimes called upon to do the unusual. Giving my master a massage would I think fall into this category! However it is often difficult to reach when the table is so high!
A more than capable butler, graced in all manner of etiquette
Head cook and bottle washer
Helicopter pilot
Masseur
Prize giver
Is there no end to my immeasurable skills and talents? But as you already know, the Butler is not one to “talk big” of himself!

Next time The General