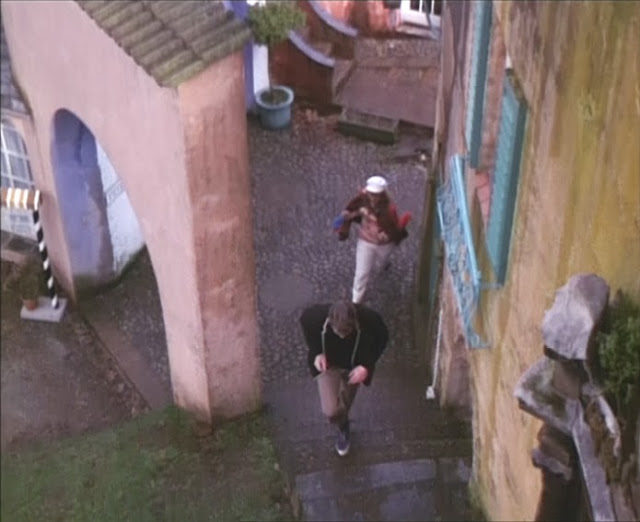 This image taken from routine surveillance film footage, shows that it's not Patrick McGoohan running up those steps, as No.6 and Monique race to stop No.51 from pressing the detonator and exploding the bomb in the Great Seal of Office during the Appreciation Day ceremony in 'It's Your Funeral.' Mind you that's not actress Annette Andre either! I believe it's Jill Hennessey doubling for Annette Andre, as it is she who appears in the photograph No.6 finds in the dead man's wallet during 'Dance of the Dead.' Jill Hennessey worked behind the camera during the production of 'the Prisoner,' for the moment I forget in what capacity. Jill went unccredited as 'the dead man's wife' in 'Dance of the Dead.' But first in 'Arrival' she doubled for the maid-No.66, standing on the balcony of No.6's cottage shaking a yellow duster, then seen hurrying away from '6 Private' along a path.


Be seeing you
Posted by David Stimpson at 08:21