Death features much in the 17 episodes of The Prisoner, from Cobb's faked death and funeral, to the deaths of the armed security guards in the cavern in ‘Fall Out.’ Even the Prisoner is abducted by a pair of Undertakers!

Turing It On Its Head
Chairman of the committee "It is the duty of this committee to deal with complaints."
No.6 "Well done! I have several."
But of course the chairman didn't mean No.6's own complaints, well he did but those against him! I like the way No.6 tried to turn the situation to his advantage, such a dry wit does No.6 have. 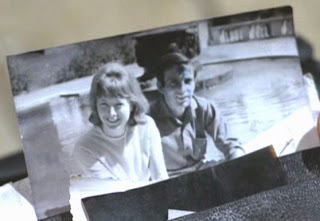 Can we learn anything from the Prisoner television series? Well I have certainly learned a good deal, and know plenty of people who haven’t!

I know it's a rule in the village, but why aren't animals allowed? After all No.2 has a cat, she told No.6 in Dance of the Dead that that black cat belonged to her. "She's mine" said No.2 referring to the black cat "she's very efficient - almost ruthless."

Slap Happy!
So No.6 is finally elected as the new No.2, and is taken to his office by his predecessor, "No need to go into details. If you want to know anything, just press a button."
But the new No.2 is accompanied by No.58, why? Well as it turns out....... but that's after No.58 slaps No.2 around a bit first. Why? Well obviously so as to bring him out of his hypnotic and drugged induced state of mind, the tissue having remained undamaged, just bruised a bit! But why the 7 slaps to the face, which has been the question on the lips of many a fan of the Prisoner. Well the number of slaps is irrelevant, as it could easily have been six, nine or ten. But in any case, we are now dealing with a most severe and even newer new No.2, the old No.58. I tell you, I wouldn't want to be in No.6's deck shoes during this new No.2's term of office. It is such a pity that Rachel Herbert's No.2 was not carried over into the next episode. What she wouldn't have had done to No.6 isn't worth thinking about!

Be seeing you
Posted by David Stimpson at 07:25