"Don't tell me that time travel is in it as well!"

Today is the 50th anniversary of DOCTOR WHO. So what's Doctor Who got to do with 'the Prisoner?' Well firstly; 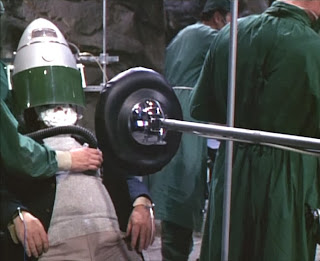 At the other end of that rod, with the attached sucker, is a Dalek! What's more, in using that hair dryer as a prop, it makes the top half look like Robbie the robot from the 1950's science fiction film 'Forbiden Planet!'
The report of Daleks in the Village brought Doctor Who to the Village, see the TARDIS has materialised on top of the Band stand! Also a few years ago, there was more Doctor Who memorabilia in 'the Prisoner' shop than there was about 'the Prisoner' series. Daleks and Cyberman littered the shelves. Not only that, the TARDIS used to be housed in the Prisoner shop! 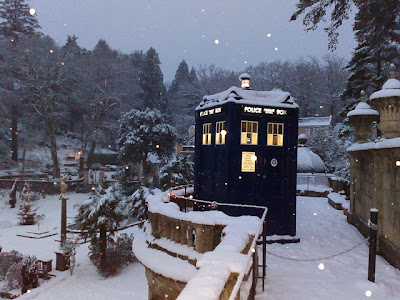 Now you will remember what TARDIS stands for - Time and Relative Demensions in Space. Namely the TARDIS is bigger on the inside than it is on the outside. Well the same can be said of the cottage '6 Private!' 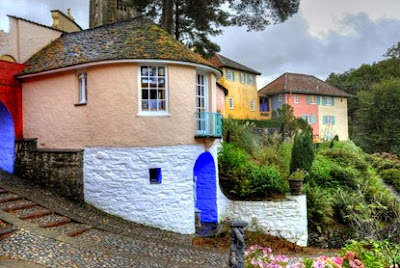 This cottage shares the same relative dimensions in space as the TARDIS, because is it also bigger on the inside than the outside. Otherwise how is it possible to fit, as well as the study, a kitchen, bathroom, and bedroom in such small space? What's more the cottage enjoys plenty of roof space, as in 'Arrival' the partition wall slides up into the roof space!