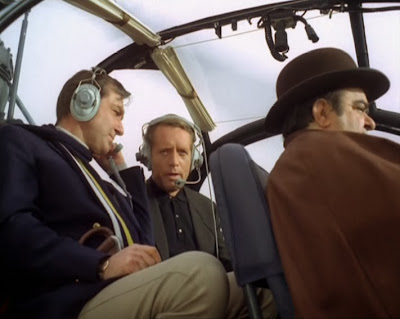 So the Butler can pilot a helicopter! But why is the Butler needed in the first place, where is the regular pilot of the helicopter? Perhaps he's on his teabreak. Or maybe his flying hours are up! Thinking about it, the helicopter is firmly on the ground when this scene is filmed. So it could have been anyone sat in the pilots seat, but the Butler {Angelo Muscat} was chosen for the scene. It would seem that he is a man of many talents!

BCNU
Posted by David Stimpson at 07:59