Its All In The Location

For many years, within the circle of Prisoner appreciation, there has been a question regarding the location of that disused runway seen during the opening sequence to the Prisoner, a runway along which the Prisoner drives his Lotus 7. Now some have it that the location is at the Lotus at Hethel in , whilst other say the location is in Hertfordshire at the Radlett Airfield. Now it would seem that there has been other extensive research carried out, and it has been confirmed, confirmed mark you, that the actual location for that runway scene in the opening sequence was filmed at the Santa Pod raceway at Poddington in Northamptonshire.
What a load of old balderdash and piffle! Why should Pat McGoohan go to Lotus and say I want to use one of your cars in my new television series, have their Lotus 7 demonstrator repainted, and then take it all the way to Santa Pod in Northamptonshire to film it on the raceway, when Lotus had their own test track, a disused airstrip at their factory, situated on an old airfield? I mean I ask you........
Now there is another British television series which is called Kingdom and stars Steven Fry and which was filmed completely in . And in one episode they needed to film on an empty road, that road was an airfield at the Lotus car factory, and the same runway used in the opening sequence of the Prisoner and it was surely plain to see. furthermore I recorded a programme about Caterham Cars - formally Lotus - and it was confirmed that 'the Prisoner' driving his car along that runway in the opening sequence was filmed on their test track at the Lotus car factory at Hethel in .
FOOTNOTE;
As it turns out the above is incorrect! I was wrong in my former belief, and Tony McKay, who had carried out extensive research into the location of that runway used in the opening sequence of 'the Prisoner' is right, the filming did take place at PODDINGTON. Yes I had my belief that Hethel was the location, so what changed my mind? Anonymous sent a link to a video on YouTube, this link;

And about 2 minutes 21 seconds into the video my eye was caught by something in the trees to the left. I checked this against the runway footage, and all my doubt was washed away in an instant.The area in the trees is circles in red in the following image. 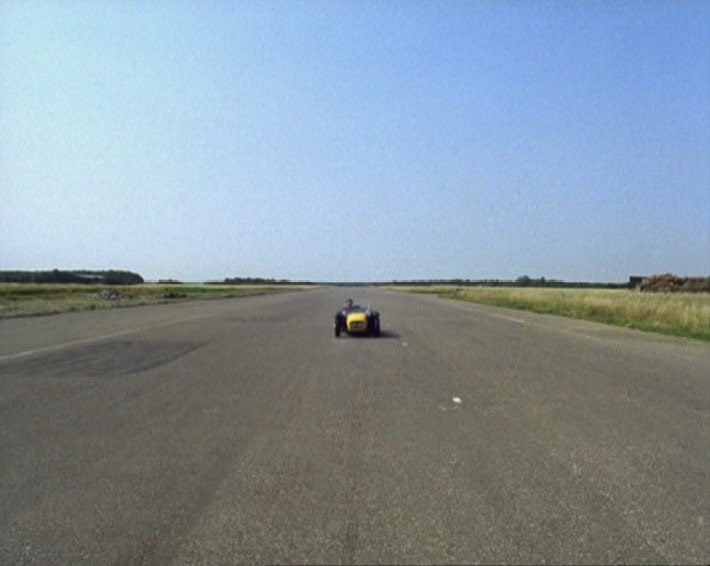 Whatever is it in the woods on the left of the picture, appears in the video footage taken at Santa Pod, Poddington. So I am pleased to have amended this blog article, and add my apologies to Tony McKay.